Poland qualified for the semi finals of the 2013 CEV Youth Volleyball European Championship – Boys as it continued its winning streak through the fourth competition day in Pool I. As it overcame the home team of Bosnia and Herzegovina by 3-0 the Polish team has yet to lose a set in this tournament. Read latest volleyball news on Worldofvolley.com. 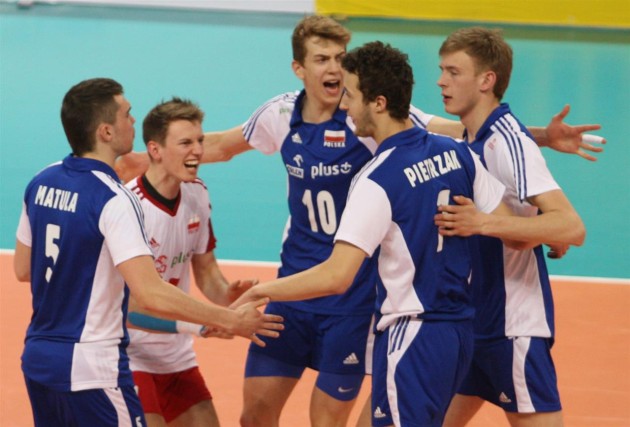 Poland claimed its fourth straight-set victory in the tournament as it ran over Bosnia and Herzegovina in the last match on yesterday’s program in Laktaši. With 11 points each, Poland’s Pawel Gryc (4 blocking kills) and Bartosz Bucko became the most prolific players of this game, while Marko Matic scored 9 points to become the top scorer for the home side.

In the first set it was hard to tell which team has not lost a set so far and which has not won a game, as the hosts took an early lead, taking advantage of Poland’s mistakes. The team of Wieslaw Czaja was able to tie the score at 10-10, but the second technical time-out was the first time it went up ahead of the opponent for 16-15. At 23-17 Poland’s way, everything seemed to be as expected, but not according to the players of Bosnia and Herzegovina. Inspired by the support of the home fans, they stormed back into contention and tied the score at 24-24. But if Poland has not lost a single set so far, why start now? With a successful spike it gained another set point and then it was Piotr Badura’s block that finished it off at 26-24.

Bosnia and Herzegovina tried to take control again at the beginning of the second set and was up by 2-1 and by 3-2, but this was all its efforts paid off with. From this moment on, Poland established total domination on the court. It closed the second set at 25-21 and the home team was practically absent in the third – 25-12 in Poland’s favor, with substitute player Jan Fornal elegantly hitting the ball off the Bosnian block for the last point.

Sebastian Pawlik, assistant coach of Poland: “Against the weakest opponents our game is on a lower level. The good news is that all players have participated. We are in the semi finals and we are concentrated on winning a medal.“

Ljubisa Ristic, head coach of Bosnia & Herzegovina: “This game has shown that the level of our game is improving as we spend more time together. Unfortunately, our opponents are also better and better, so we did not succeed to win at least a set. Maybe it is a bit weird, but actually this tournament serves for us as preparation for the Balkan Championship.“

Bartosz Bucko, captain of Poland: “Even though we won, it was a terrible game. The only good news is that we are in the semi finals. I hope that we will play better in next matches.“

Muris Krivokapa, captain of Bosnia & Herzegovina: “As the tournament is moving forward, our game is improving. We are sorry because we lost the chance to win a set against Poland, which plays the best volleyball in our pool.“

YEC M: Finland joins Russia in the semis as runner-up in Pool II