On Wednesday Poland’s champions Atom Trefl SOPOT will make their debut in the 2014 CEV DenizBank Volleyball Champions League as they play Dinamo Romprest BUCURESTI in Romania’s capital city. The Atom girls will be flying there in high spirits after on Saturday they won also their last game in the national league edging Fakro Muszynianka MUSZYNA 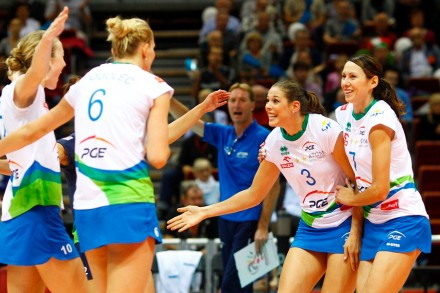 The hosts had many problems to stand the quality displayed by SOPOT and especially their efficiency in attack was very low. On the other side of the net, Charlotte Leys registered a terrific 100% of positive and 54% excellent reception, finishing the game with 13 points, as many as those scored by Anna Podolec. US American Kimberly Hill was Atom Trefl most prolific player with 14. “We played well in defence and even sometimes our spikes were not that good, we could compensate with a great performance in this fundamental” Hill said.

After a sloppy start of the season with two straight defeats, it looks like Atom Trefl is back on track. “It looks much better than some weeks ago but we still have many things to improve” commented libero Mariola Zenik after the match. “We are still working on our play but you can see that it got much better than at the beginning of the season”.

On Sunday morning the team got back home and had a short break before resuming their training on Monday. On Tuesday morning they will leave to Romania for their first game of this much anticipated European season.

POL W: “It was not easy against Gornicza” – Glinka

ITA W: No surprises in Serie A