Atom Trefl SOPOT recently started some special actions to make Volleyball even more popular in their neighbourhood. Poland’s champions are regularly starring in a radio program of their own but they also joined forces with Polandia, the internet program especially conceived for foreign people that are working or simply living in the country. 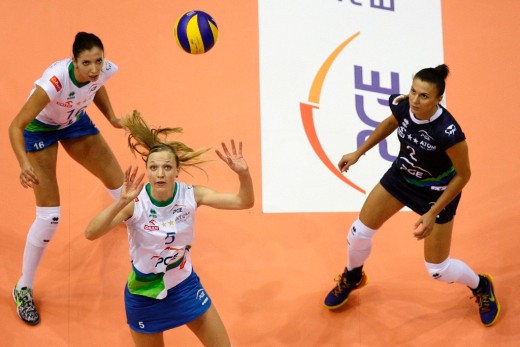 The latest idea by the club management is the broadcast known as Mistrzowska zagrywka – which means “the champion’s serve” – on Radio Gdansk especially dedicated to all fans of Atom Trefl.

This is aired on Saturday at 5:45 pm thereby providing the players with the chance to discuss about their latest performances and upcoming matches in the national league as well as in the CEV DenizBank Volleyball Champions League.

In the first episode Mariola Zenik and Anna Podolec shared their impressions after the CL match played in Romania with Dinamo Romprest BUCURESTI as well as their expectations ahead of the games with BKS Aluprof BIELSKO-BIALA and GENT Dames.

Last week the same players reminded all fans to send out their thoughts and prayers – in combination with the celebrations for All Souls’ Day – to the late Volleyball star Agata Mroz-Olszewska, who prematurely passed away in 2008, aged 26. Every episode of the program is also available as a podcast on Internet for those who are not able to follow the live transmission.

Last year the one starring Rourke was viewed by more than 180,000 people. Pietersen also got the opportunity to share her impressions after moving to Poland last summer and she even spent some time recalling the funniest situations and some other special things she has experienced in her daily life. In the coming weeks Polandia will be joined by another two foreign players of Atom Trefl, Charlotte Leys (BEL) and Kimberly Hill (USA).