Plusliga is slowly heating up and after the last round there are no more undefeated teams in the championship. Skra Belchatow lost to Cerrad Czarni Radom and know has to share the first place with two other teams – Resovia and Olsztyn! Krzysztof Stelmach is doing a fantastic coaching in Olsztyn and they are playing as well as they ever did. 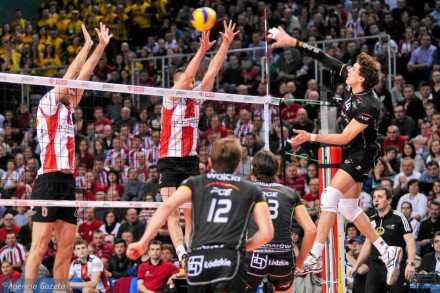 There are two games to be played in the Friday evening. Transfer Bydgoszcz will try to be a bad host to ZAKSA who is coming of the defeat in Champions League and surely wants to bounce back with the win. Later that night LOTOS Trefl Gdansk is expected to run over Czestochowa and restore hopes to finish in the top of the table.

Cerrad Czarni Radom and Politechnika Warszawska will play the Saturday evening matchup. Czarni Radom are the huge favorites coming of the two consecutive wins over Transfer Bydgoszcz and Skra Belchatow.

Sunday is reserved for Jastrzebski versus BBTS Bielsko-Biala and Effector Kielce versus Olsztyn. Champions League participant Jastrzebski is expected to destroy their guests on the day, while other matchup is widely open between Kielce and Olsztyn.

Since 2004/2005 season, no other teams then Skra Belchatow and Asseco Resovia have won the Polish championship! Last two ended up in Resovia’s clubhouse, while seven(!) before that had Skra’s name on it.

Big derby is going to be as heated as ever, rivalry between teams is huge and history as well. Last season they have played an amazing series in playoffs where Resovia led 2-0 in terms of wins and 2-0 in the third match, but Skra led by Atanasijevic, came back and forced game five! Resovia ended up winning the decider in tie-break and later winning the title. So there is no better build-up to this match then revenge thirst of Skra’s young rejuvenated team led by coach Falasca.