The game starring Atom Trefl SOPOT and Turkey’s VakifBank ISTANBUL coming up on Tuesday for the prelims of the 2014 CEV DenizBank Volleyball Champions League is one of the volleyball events of the year in Poland. The Atomic girls will try to stop the terrific winning streak – more than 60 matches in a row – of VakifBank and a large audience is expected to come together at ERGO Arena in Gdansk. 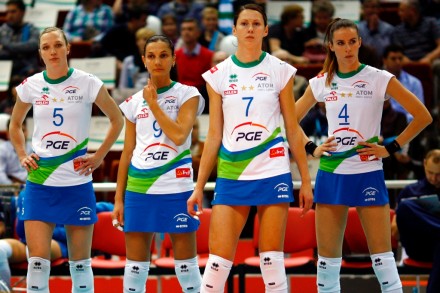 “VakifBank is the best team in the world but still it is sport and everything is possible. The most important thing is that we play good without making unforced errors. Then we’ll see what will happen. Even if we lose after playing a good game we won’t be ashamed” says Atom Trefl captain Izabela Belcik.

Atom Trefl is making this year their third appearance in Europe’s elite club competition and for the second time they are crossing their ways with those of the reigning club world champions. They did so in 2012 as they played Rabita BAKU in the 1/8 finals and after winning 3-1 at home they were very close to cause a sensation and make it to the next round. However, Rabita bounced back winning the return game at their home and also the golden set to shatter the dreams of glory of SOPOT.

Last January SOPOT played against VakifBank in the Playoffs 12 of the 2013 edition and the Turks seized two wins – 3-1 in Sopot and 3-0 at home – to make the next round. These two victories count for the terrific winning streak – 62 consecutive matches – that VakifBank has put together by combining European Cups, national league and other competitions. Actually SOPOT is the last team to have beaten VakifBank as the Polish champions did so in September 2012 in a friendly tournament in Koszalin where they won at the tie-break.

“It is sport so everything can happen but we have to know that VakifBank is well ahead of us for their coach Giovanni Guidetti has been working with this team for four years already. They have improved season after season and claimed a series of international trophies. On the other hand I have just started my work here but we have already put together a strong group” says SOPOT mentor Teun Buijs. “If this is enough to beat VakifBank this we’ll get to see on Tuesday but it also depends on the support of the audience, and if my girls are able to play calm and smart. For all these reasons I am curious to see what will happen on Tuesday night”.

VakifBank has registered only two aces more than SOPOT so far in the competition while Trefl have killed 33 blocks vs. 26 for VakifBank. The reception will be crucial for the home side as well as the efficiency in attack. SOPOT hopes to stop the Turkish spikers with their block, their main weapon so far this season. “We played well in this fundamental on Saturday as we beat Palac BYDGOSZCZ in the last match of the national league but VakifBank has much more experienced players so it will be hard to stop them. The level of the game will be much different than any other we have played so far this season” team captain Belcik stresses.

Every player is much looking forward to the game with the Turks: “We know it will be a tough match so everyone must be ready to help. I hope that we will perform well and show our best game. We want to get another few points,” says wing-spiker Klaudia Kaczorowska.

Teun Buijs says there won’t be major changes in the starting six. However, Kimberly Hill just got back from Japan where she won silver with Team USA at the World Grand Champions Cup and she is in a very good shape. Brizitka Molnar, on the other hand, delivered a superb performance in the match with Palac and was named MVP at the end of that game. What’s more, Judith Pietersen showed her best performance this year registering 16 points in the game with Palac. “It is a luxury to have 12 players that are all ready to play their best” Buijs comments. “We will see who will play with VakifBank. We first have a practice Monday and then I’ll make up my mind” he concludes.

Jeff Menzel and his tattoos (VIDEO)