Warsaw, Poland, March 23, 2012. The head coach of Poland women’s national team, Alojzy Swiderek (pictured), recently announced the composition of the group that will prepare for the Olympic Qualification Tournament scheduled for next May 1-6 in Ankara and whose winners will book a trip to London 2012. 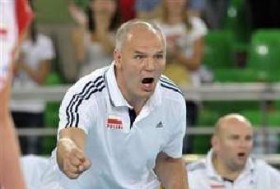 Poland was assigned by the DOL to a preliminary group including also the 2011 European champions of Serbia, the 2010 World champions of Russia and the Netherlands, while group A comprises Germany, Turkey, Bulgaria and Croatia.

The first and second ranked teams of the two Pools will play crossed semifinals before an Olympic ticket will be at stake in the final game.

Some medical tests are foreseen for next April 3-4 in Warsaw before the start of a training camp lasting from April 10 until the end of the month and taking place in Szczyrk.

Poland will play a couple of friendly matches against Germany in Dabrowa Gornicza (April 26-27) and then travel to Turkey to get ready for the start of the Olympic qualifier.