Schwerin, Germany, March 23, 2012. This past Tuesday SCHWERINER SC played its last match for the regular season of the Bundesliga by testing out the likes of VfB 91 SUHL. This was also the first home game since this past March 4, i.e. since the team had claimed the national cup in Halle/Westfalen, so the players profited of this chance to express their gratitude to their 600 fans that had traveled to the cup final, thereby creating a great and unique atmosphere at “Gerry Weber Stadion”. 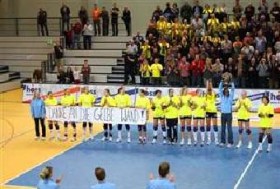 The last match of the regular season was postponed as VfB 91 SUHL was busy this past weekend with the semifinals of the 2012 CEV Volleyball Challenge Cup where the group mentored by Felix Koslowski eventually lost to Baki BAKU of Azerbaijan.

Even though VfB 91 SUHL was visibly tired after the long trip from Azerbaijan via Moscow, still the opening set was very close with SCHWERINER SC eventually wrapping it up at 26-24.

Afterwards, the guests gradually ran out of fuel and SCHWERINER SC could pocket the next two sets quite comfortably (25-13, 25-16).

Dressed with the same yellow t-shirts their supporters were wearing some weeks ago in Halle and taking a self-made poster featuring the sentence “Danke an die gelde Wand!” (“Many thanks to the yellow wall”, see picture) the players from Schwerin did clearly show their gratitude for the loyalty and passion showed by their fans.

SCHWERINER SC and VfB 91 SUHL will cross their ways once again in the Playoffs as they ended the regular season in third and sixth place respectively. The first match is scheduled for this Sunday and the return for next Wednesday in Schwerin.