CL W: Chemik POLICE want to be this year’s sensation

Poland’s champions Chemik POLICE will be making in about ten days their debut in the CEV DenizBank Volleyball Champions League – Women. 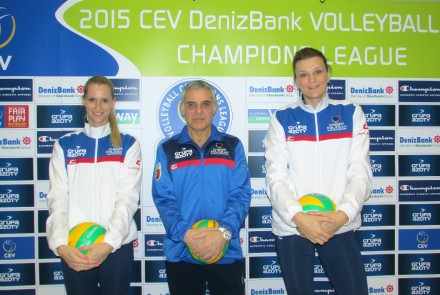 Last October 30 the club organised a media event at the Szczecin Arena, the venue that will host all of their home matches in Europe’s elite club competition, where head coach Giuseppe Cuccarini, team captain Anna Werblinska and Poland’s Volleyball icon Malgorzata Glinka-Mogentale discussed their feelings and expectations ahead of this much anticipated campaign.

“We are just at the beginning of the season and we have only played four matches in our national league so far,” Cuccarini said. “We are still learning to play together since our Serbian players could not join us for the preparation phase as they competed at the World Championship in Italy with their national team. In spite of all this, we have already won four matches in a row. There is still a lot of drawbacks and inaccuracy in the way we play, but these victories have helped create a good atmosphere in the team and provide an extra mental boost. Day by day and week after week we are improving on our physical condition so that I hope that we will be well ready for our first match with Rabita BAKU on November 12.”

“Our team is a rookie in this competition but we shouldn’t forget that about twenty years ago this club participated in the European Cups and ended up in third place in the Cup Winners’ Cup. Even though this is the first participation for Chemik in this competition, many of us have a wealth of experience from playing with other clubs as well as with our respective national teams. This will definitely help us, especially in our away matches. I have to acknowledge that the expectations of our fans are high and this is understandable. Our goal is to represent Polish Volleyball on the international stage in a good way and achieve the best possible result. We will be playing each game the best we can and fight to the end no matter which opponent will be standing on the other side of the net.”

At 37 years of age, Malgorzata Glinka-Mogentale is definitely the most decorated player on the roster of Chemik POLICE and she is also the only one to have won the CEV Volleyball Champions League before.

“It was an amazing time and have very good memories,” she said. “We all know which the current distribution of forces in women’s Volleyball in Europe is at the moment. But if we are able to cause a surprise and change the current hierarchy, that would be great! We have to be stay concentrated and be ready to fight for each point in every match. If we succeed in doing so, then we will have accomplished our mission, because we have fulfilled our task. We have a team with a lot of experienced players but also some younger ones that have a long and bright career ahead. This can be our main asset for this competition.”

As a Polish I’m saying investing money in clubs women voleyball in Poland is wasting $ and time especially after guys became world champions. First they must rebuid women national team, old generation is ended totally, Glinka last season in club and end career, Werblińska not young and Serbian colony won’t play forever for this club. We need new generation, Polish girls more ambitious generation. Sponsor Grupa Azoty S.A after this one year should resign absolutely from investing in women volleyball and help Zaksa men team because they have some troubles mainly because of this women team and I think 90% volleyball supporters in Poland think the same as me. Definitely sponsor is strange because Zaksa has bigger tradition and this women team is not natural.

What a nonsense you write. Sponsor should investing only in Zaksa, 90% volleyball supporters in Poland think the same as you? Joke of the year hahahahahahahhahaha. where did you get these 90%. Get down on the ground.