#IAMINBERLIN: “My dream is to win Champions League with Skra” says Winiarski

Although choosing a superstar among the many great players on the roster of PGE Skra BELCHATOW looks like a mission impossible, Michal Winiarski is the one who delivered a superb performance on Wednesday night as Poland’s champions secured their ticket to the Final Four of the 2015 CEV DenizBank Volleyball Champions League – Men. 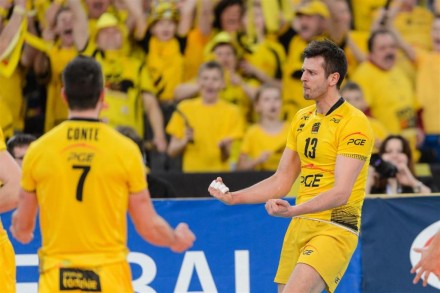 “About a year ago I had had a big dream as I wanted to become a world champion. Now my dream is to win the Champions League with PGE Skra. You always have to believe in your dreams,” states Winiarski , who captained the Polish national team that won home gold at the 2014 FIVB Volleyball Men’s World Championship. “September was a perfect month for Volleyball in our country. March may also turn out to be a golden one.”

Michal Winiarski was the leader of PGE Skra by the time the team claimed two of three Champions League medals in the club’s history – bronze in 2010 and silver in 2012.

“I feel very good with PGE Skra and in Belchatow as well. It is a small city and I do not need anything more for me and my family,” says Michal Winiarski, whose great performance at the Atlas Arena in Lodz was carefully followed not only by his wife, but by his mum and dad as well. “I am very happy with the fact that we beat Sir Safety PERUGIA by 3:1, but I do not feel like a hero,” he continues, though he was the real hero for the home side on Wednesday night.

“I have a complete set of medals from the CEV Volleyball Champions League in my collection, but I dream of having a complete set with PGE Skra. We believe we can do it. We have a great team, and we also have a great team spirit. We made it to Berlin and now we have to stand also this final, ultimate challenge,” Winiarski says, starting with the semi-final derby with Asseco Resovia Rzeszów that is coming up on March 28 at the Max-Schmeling-Halle.

GREEK CUP M: PAOK to play in final after 32 years, injury of Mijailović