Asseco Resovia has made such an important break against Lotos Trefl Gdansk in the final series of the Polish Championship. The red and whites now lead 2-0 in the series! 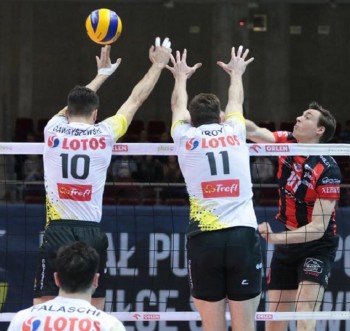 Ergo Arena was packed and ready for the big volleyball show. And, the second game of the final series, in which Lotos Trefl Gdansk hosted Asseco Resovia, was indeed a great spectacle. With loud support from the stands, home team managed to clinch the opening set, but Resovia answered back immediately and tied the score at 1-1. Not just that! The red and whites were brilliant in the third set as well and took over the lead at 2-1!

Asseco Resovia was very close to finish the game in the fourth set. It was 22:21 for the away team, but then Troy Murphy scored, tied the score at 22:22 and went for a serve. The American player made two aces in a row – 24:22 for Gdansk! Sebastian Schwarz scored the final point – 25:23, all tied at 2-2 in sets.

The tie-break was an icing on the cake. Thanks to some great serves of Jochen Schops, Resovia escaped to 3-0, and then successfully kept the three-point lead – 5:2, 6:3, 7:4, 8:5… And then Mateusz Mika got blocked and it was 9:5 for Resovia! But, the home side was not thinking of surrender! They reduced the deficit to 12:10, and then it was once again time for Troy Murphy to serve! He made an ace for 12:11, then Wojciech Grzyb blocked Nikolay Penchev for 12:12!

You can only imagine the noise in Ergo Arena when Gdansk managed to tie the score in the fifth set. However, the joy of the home fans haven’t lasted for long. Resovia retained the lead at 13:12, while then Dawid Konarski replaced Fabian Drzyzga and performed the crucial block on Schwarz – 14:12! Couple of moments later Jochen Schops scored the last point on this game with a great spike – 15:13! Asseco Resovia won the Game 2 and doubled the overall lead in the final series at 2-0!

Next match is 8 pm time

Why Resovia have to win?
I think this team is only strong for Polish league,Champions League is to strong.

Juan that’s why they won silver medal in champions league in this year, you’re right lol