WL: Poland in semifinals! Italy will cheer for them in the last round… 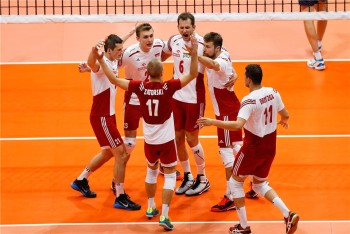 Poland had a such a powerful start of this match. Boys led by Stephane Antiga simply hammered Italy in the first set and the final score proves it – 25:15! But, then things started to be more interesting.

Azzurri were not about to surrender that easily, even though they were playing without four major stars. Italians were much better in the second set and they were at the edge of tying the score. It was 23:21 when Luca Vettori scored… But, they did not manage to make the final blow. Poland saved all set points of their opponents. The last at the score of 25:24 when Bartosz Kurek made such a valuable block for 25:25. Then Michal Kubiak went for a serve. He scored two aces in a row!!! 27:25 and 2-0 in sets for Poland!

Italy found strength to recover from a tough defeat in the previous set and to win the third one by 25:20, but that was it. They could not go any further. Poland did not let them.

With fantastic tandem Kubiak-Kurek on the court, the reigning world champions finished the job in the fourth set. They made the crucial margin at the middle of the set when they increased the lead from 11:10 to 16:12… Poland was simply too good to drop that lead – 25:20, 3-1 in sets.

With this win Poland secured the place in the semifinals of the World League 2015, while Italy  will have to wait for the outcome of the last round. Azzurri will cheer for Poland in the match against Serbia as Berruto’s squad will advance further only if the red and whites make another win.

WL: How much skill you need for this? Magical set by William! (VIDEO)