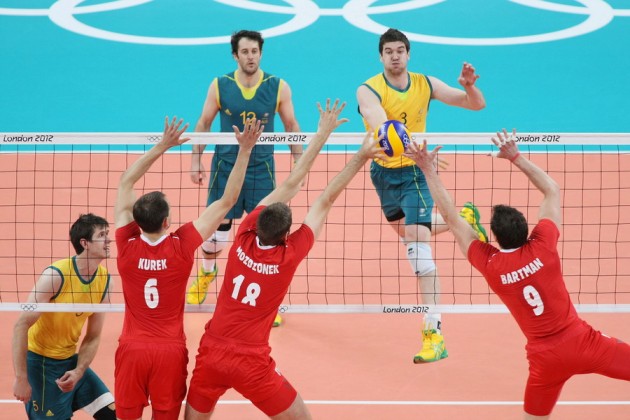 Australia‘s performance belied their tournament standing which had so far seen them only defeat winless Great Britain. Poland, who have already qualified for the quarterfinals courtesy of three victories in pool A, couldn’t get into any sort of rhythm in the first two sets and Australia took full advantage.

After winning the first set 25-21, Australia continued to dominate in the second set, getting into a lead which they never relinquished. Poland‘s match was summed up by a mix-up at 21-17 where the Poles misjudged an easy ball leaving it to drop in at the side of the court.

At 24-19, three unforced errors from Australia gave Poland a glimmer of hope but a strong spike by Adam White (AUS) secured the set 25-22.

Poland improved in the third set with some strong defensive play. Australia found it almost impossible to get past Grzegorz Kosok and Michal Winiarski helping Poland to a 25-18 set win.

But Australia were not to be denied a surprising win. At 18-18 in the fourth set, Nathan Roberts produced a powerful cross-court spike which put Australia in the ascendancy and they quickly wrapped up the decisive set 25-22 thanks to an ace from Travis Passier.

Thomas Edgar was the best scorer of the match, ending his game with 26 points, well served by his setter Harrison Peacock.

Both teams will discover their quarterfinal fates later on Monday when the draw for the knockout stage takes place following the last preliminary match between Brazil and Germany.