Russia cruised to a straight sets victory (25-15, 25-20, 25-17) against Serbia at Earls Court on Monday to confirm their place in the men's volleyball quarterfinals. 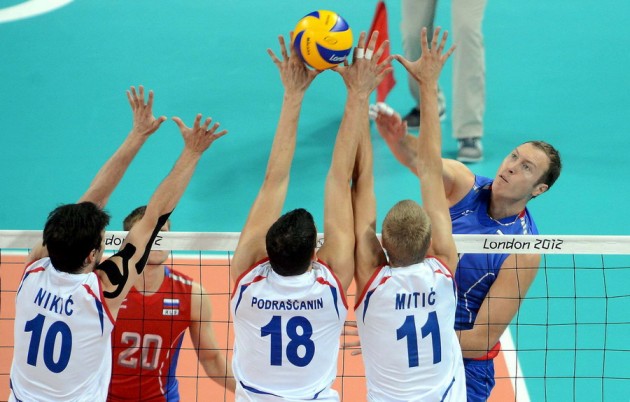 Serbia could have drawn level on points with Russia in Pool B had they won, but Russia were dominant from the outset with a combination of pure power and delicate shots to quickly establish a two set lead. In the final set Russia piled on even more pressure and raced into an early 6-1 lead thanks to some powerful serving.

Russia Maxim Mikhaylov was at the centre of most of Russia‘s attacks, scoring 18 points. When Serbia did manage to break through the Russian defence, it was often Aleksandar Atanasijevic who won the points, with the 21-year-old responsible for 18 of the 52 his team managed over three sets.

A block from Russia Alexander Butko at 23-15 set up match point and, although Serbia delayed the inevitable by winning two points, a fierce spike by Taras Khtey completed the third set 25-17.

As Russia advance, Serbia‘s hopes for progressing to the quarterfinals now rest on Germany suffering a heavy defeat to Brazil in the final Pool B match on Monday.

NORCECA W: Coaches are ready for the U18 Women’s Continental Championship