Italy dissipated a 2-0 lead in the last match of the day in Pool I before the teams enjoy a well-deserved day of rest and eventually suffered the comeback of the home side that totally ruled in the deciding tie-break to claim their second win of the tournament (21-25, 18-25, 25-20, 25-19, and 15-6) after losing another decider on Sunday to Pool leader Belgium. 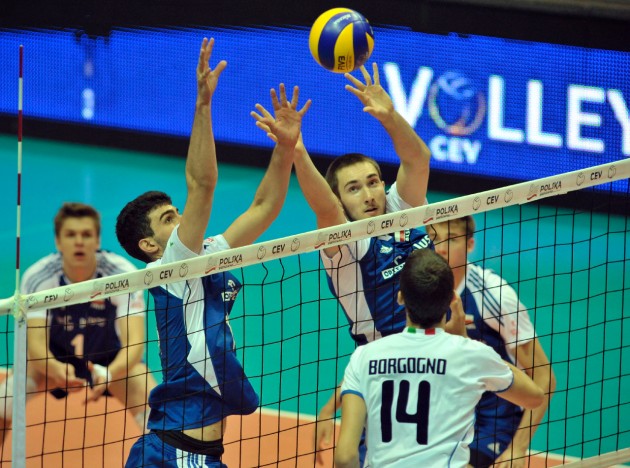 With Belgium having downed Russia, Italy needed to edge Poland in the last match of the day to remain in contention for the top position of the group and actually the young guys mentored by Marco Bonitta started out with the right pace and intensity (4:0, 8:4); the home heroes were boosted by the local audience, as usual provided with the traditional white and red outfits and by their outstanding left-handed opposite Maciej Muzaj, but as the set progressed, they still were chasing their opponents who maintained a slight margin of a couple of points (21:19). Although Poland eventually compensated for that gap at 21 all, Italy played the next couple of rallies very cleverly to restore their leadership (23:21). An ace by Luca Borgogno piled up three set balls for the “Azzurri” – actually today playing in white jerseys – and the final 25-21 was sealed by a double block that demonstrated the mental strength of the guys coached by Bonitta in the key moments of the set.

A similar story unfolded in the second set where Italy got immediately to the front and Poland almost always had to come from behind; actually the score was almost leveled by the second technical break (15:14) but right there Italy changed gear once more, with a splendid series of attacks and the excellent consistency showed by their defense line. Well commanded by their setter Marco Izzo, the Italians scored from almost every single angle of the court, alternating fast balls to more sophisticated combinations, while Poland evidently lacked quality in reception, and Luca Borgogno pocketed the provisional 2-0 with a pipe attack that you may rarely see at such level in a junior competition (25-18).

Having no other chance than to push hard to possibly get back into the game, Poland opened with a splendid 8:4 run in the third set before a lucky ace by Marcin Janusz (12:7) prompted a time-out by Italian coach Bonitta. His guys responded well and almost cut the gap to a minimum (15:13), but with Poland speeding up to 20:16, Bonitta changed his diagonal with Luca Spirito and Gabriele Nelli replacing Izzo and Caci. Still Poland kept the upper hand and even though a good serving turn by Luca Borgogno reduced a little the deficit, Muzaj finished it off at 25-20 to call for the fourth set.

Things did not look any better for Italy in the opening phases of set 4 with Poland quickly going up 6:2 and 8:4; however, the course of the game changed once more as Italy found back their original composure to go for the -1 before Muzaj anchored another spectacular run for the home side (16:11). Lukasz Lapszynski and Piotr Orczyk helped the home favorites resist to a potentially dangerous comeback of the Italians (21:18) and Poland got the right to play their second tie-break in two days – actually similarly to Italy – after the unhappy end of yesterday’s game with Belgium (25-19).

Poland was just flying on the wings of enthusiasm opening the deciding set with a terrific 7:0 that Italy could no longer compensate for; at 13:4 for their heroes, the audience started the countdown separating Poland from the finish line and Orczyk left his mark on a crosscourt that piled up 9 match balls, with top scorer Maciej Muzaj closing it out for the hosts’ second win in the prelims (15-6).