“One food item for a ticket”: this is the motto of the special campaign that will be carried out by the Portuguese Volleyball Federation in conjunction with the second round qualifier for the 2013 CEV Volleyball European Championship – Men coming up in early September in Vila do Conde. 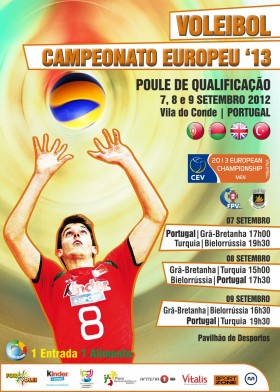 This unprecedented initiative is meant to appeal to a spirit of solidarity in the fight against hunger and will see non-perishable food items (such as pasta, flour, biscuits, rice etc.) collected there during the tournament.

As Portugal plays host to Great Britain, Belarus and Turkey through September 7-9 special containers will be available in the sports hall of Vila do Conde to collect such items that will be donated to a charity while the fans fill up the stands to support the national team.

After completion of the tournament in Vila do Conde, the teams will move to Ankara, Turkey, for the second round robin running through September 14-16 and that will determine the side that will advance directly to the final round coming up next year in Denmark and Poland.