Belgium extended its supremacy in the group by scoring a terrific 3-0 win (25-23, 27-25, and 25-15) over Russia to maintain a perfect record going into the rest day coming up tomorrow. 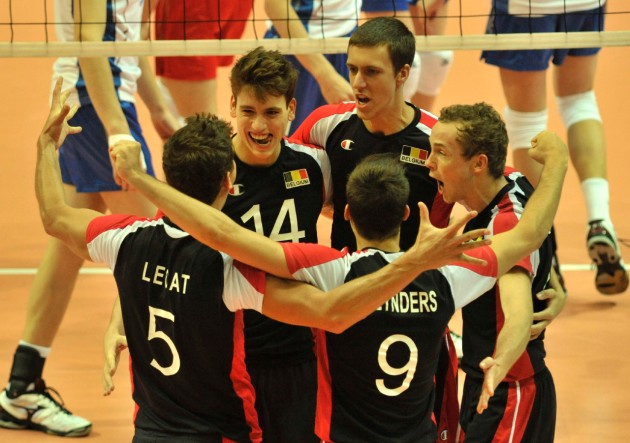 The major sensation of the tournament after two days, Belgium got another demanding test on Monday playing the heirs of the 2010 junior European champions from Russia. The group that is mentored by the youngest coach in the tournament, Steven Vanmedegael, did not show any fear while standing in front of the always physically imposing Russian players and was quickly able to impose their game (8:4, 14:10). Russia was, likewise in the previous matches, too faulty but still could profit of a short blackout of the Belgians to fight back to level the score at 22 all. The Belgians nevertheless stayed focused and a time-out called by their coach helped get back the necessary confidence to claim the opening set 25-23 via a serving error by Yaroslav Podlesnykh.

Belgium dictated the pace of the game also in the second set (8:5) but halfway through the score got a little closer even though the guys captained by Tomas Rousseaux were regularly ahead, and especially by the moment the deciding phases were approaching (20:17, 22:19). However, Russia showed some real determination fighting their way back to 24:23 but after missing on a first opportunity for the provisional 2:0, Belgium cashed their second set ball for the 27-25 that turned the game into a very demanding uphill climb for Russia.

The Belgian show continued also in the third set (8:3) as Russia looked not capable of varying their play in offense, made almost exclusively of high balls, and everything looked just fine for Belgium as Francois Lecat called for the second mandatory stop (16:11) with a splendid attack from the wing. It was really impressive to see the superb and smooth flow accompanying all of their actions (20:13); with the Russian defense lacking quality – coach Shlyapnikov did not miss his chance to yell a bit around as he is normally used to – a flurry of mistakes just paved the way with gold for Belgium. A couple of net violations contributed 10 (!) match balls for Belgium and the historic win – and second defeat in straight sets in three days for Russia, this is also something that people have witnessed quite rarely in Volleyball history – was there as Arno Van De Velde scored from the middle of the net to seal his side’s third consecutive win in Pool I.