CEV CL M: After another dramatic tie-break Zenit KAZAN makes it to Playoffs 6

Zenit KAZAN needed once more five sets – similarly to what had happened last week in Germany’s capital city – to edge BERLIN Recycling Volleys (25-15, 21-25, 28-30, 25-13, and 16-14) and eventually make it to the Playoffs 6 of the 2013 CEV Volleyball Champions League – Men. This and other volleyball news read on Worldofvolley.com. 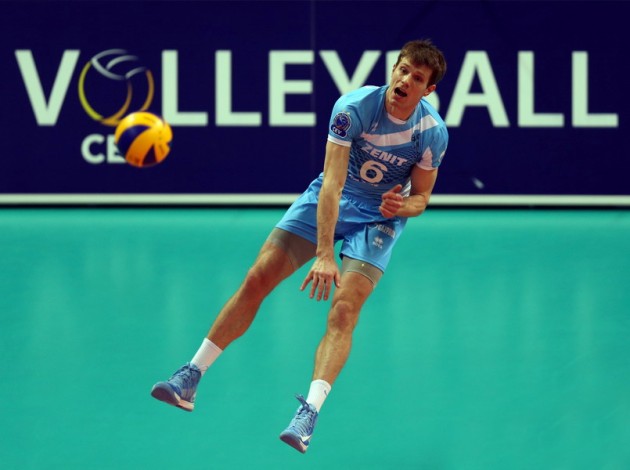 As 5’000 fans were in attendance at St. Petersburg sports hall in Kazan, Zenit caught a terrific start and with a series of great serves contributed by Evgeny Sivozhelez quickly moved the score from 5:4 up to 11:4. The spikers of Zenit added some more energy to the play of the hosts and Zenit did easily pocket the opening set with the score of 25-15.

However, BERLIN fought their way back in the second set with Robert Kromm and Paul Carroll who did pressure Zenit back-line with a series of powerful and well-placed serves. BERLIN got up 19:12 but Zenit responded well by clawing back almost closing the gap (21:20) before the guests accelerated the pace down the final stretch for the provisional 1:1 in sets (25-21).

The head coaches tried to find some tactical options to get the right edge in the game with Mark Lebedew – the Australian mentor of BERLIN Recycling Volleys – bringing in their second opposite Aleksandar Spirovski who eventually killed a series of spikes. His counterpart Maxim Mikhaylov did not respond that well and after a series of great rallies, Robert Kromm sealed the 30-28 that did also contribute the provisional 2:1 lead in sets for the guys from Germany.

However, the guests could not keep that terrific pace that long and Zenit imposed its quality in set 4 supported by David Lee and once more the great serves showcased by Sivozhelez. After going up by 10 points (21:11), Zenit comfortably claimed that 2:2 (25-13) that called for the tie-break.

A very close fight followed in the tie-break but this time it was Mikhaylov who took his side by the hand and could score the critical points, with the last rally contributed by a block of David Lee on young German spiker Bjorn Höhne (16-14).

“We have made it to the Playoffs 6 and this is what really counts” said Zenit head coach Vladimir Alekno after the game. “I have to thank our fans as tonight they really contributed a great ambiance in the arena”.

“We were very close to call for the golden set but we missed out on this opportunity and can’t party in the end” adds BERLIN mentor Mark Lebedew. “I can say that we played an ideal match but we failed to keep momentum in the tie-break”.