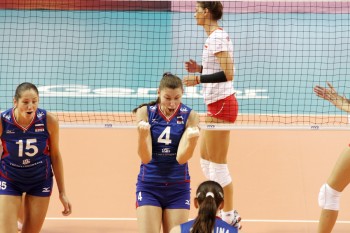 The opposite spiker Katarzyna Skowronska of Poland toped the scorers with 41 points.

Russia started strongly but Poland kept the score close. In the end of the set the Russians improved their level and won the first set 25-21.

The second set started really even again. However, this time, Poland jumped ahead in the end and closed the set with 25-22.  The opposite spiker Skowronska shined with powerful spikes and 10 points.

Russia took an early lead and went to the second technical time out with a four points lead (16-12).  The end of the set was dramatic but Russia, with a block, took the set with 29-27.

Poland started better in the fourth set and open five (10-5). Russia improved their game and took the lead in the second technical time out 16-14.In a dramatic ending, Poland won the set with 30-28.

Russia got back really strong in the fifth set and won the set with 15-13 and the game 3-2.

To see more about this competition, check out our World Grand Prix 2013 page.