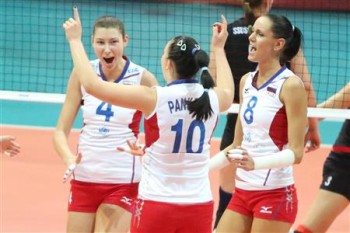 World No.8 Germany performed superbly in the previous week in Pool H by stunning hosts Poland in straight sets and gave the Grand Prix leaders Japan a daunting task in a five-set thriller. They have their sights on a clean sweep in Pool L to make sure their Finals ticket can be within their reach. However, things turned sour for the Germans.

Defending and successive two-time world champions Russia, whose height average is 186cm against the rivals’183cm, got off to a dismal start in the first set. first set when Germany, led by hard-attacking Saskia Hippe and veteran Christiane Furst, played exceptionally well to win the closely-contested first set 25-22.

Germany continued their winning streak in the second set, which Russia became more prone with unforced attacking mistakes. Germany led from the start to finish to take the easy second set 25-17.

Tatiana Kosheleva and Nataliya Goncharova gave the world No.6 a successful comeback in the third set when they punctured the German defence with their powerful attacks for the Russia’s 25-18 win.

Russia still showed their brave fight in the fourth set. Kosheleva and Goncharova overcame the smaller blockers with their aggressive attacks to help their team win the set 25-19.

The decider saw Russia prove more steadily to capture the exciting battle 15-11 and the grueling 3-2 match.