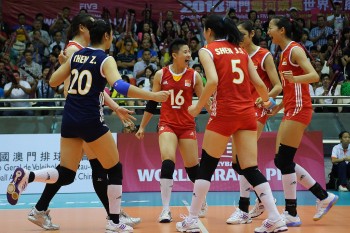 The first set started with Argentina dominating play at the net with strong spikes, but after the first technical time-out China strengthened their defence and Argentina had difficulty with the home team’s effective blocking.

China revealed more determination in the second set and stormed into a 5-0 lead, forcing errors from Argentina that prompted an early time-out.

From then on China played more patiently, persistently and with flexibility. Argentina stayed within reach but, thanks to Xu Yunli’s blocking, China won the second set 25-17 to lead the match 2-0.

The third set started with powerful attacks and blocks from China and they jumped out to a commanding 7-4 lead, and maintained that advantage until the second technical time-out.

China then closed out the set 25-16 and the match 3-0 with a strong attack from Liu Dan. China captain Hui Ruoqi was the match’s leading scorer with 16 points.

China’s task of defending their 100% record now gets tougher as they face Poland on Saturday and Serbia on Sunday.