Irina Zaryazhko, middle blocker of Uralochka and the player in the starting lineup of this year’s renewed women's national team of Russia, will go with the “Zbornaya” to Dresden on September 4. In this German city, Russians will play three group stage matches at EuroVolley 2013 against teams of Belarus, Croatia and Azerbaijan. 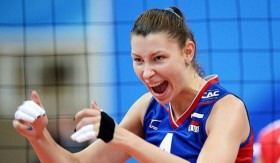 Will Zaryazhko help the team of Russia on September 6 in the first match of the tournament, it is still unclear.

The player sustained ankle injury while playing with the national team against Thailand in the preliminary round of the World Grand Prix.

According to the medical report ten years ago, she should be out for about three weeks.

However, despite the injury, the 22-year-old Zaryazhko will be announced in the squad for the European Championship in Germany and Switzerland.