The new player of Taubate, Giba, still waiting for debut. 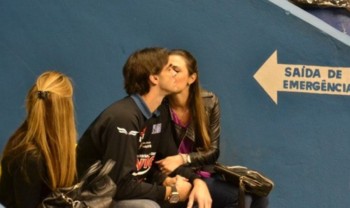 Giba and his girlfriend

His club has played a game in Paulista Championship against Atibaia, and he was just a spectator.

Accompanied by his girlfriend, model Maria Luiza Dautt at the stands, the receiver was available for talking and taking picture with fans.

The Brazilian star has corresponded with good humor to the charges of the fans, who have chanted “Put Giba on court”. Whenever the fans called him, he stood up and greeted.

He is in recovery phase and Giba’s goal is to make a debut in the first game of Brazilian Super League.

“We have a quality team. I’m asking fans to be patient, because I’am working hard to be able to play as fast as possible” said Giba after the game, which Taubate won by 3-1.

See the WoV Community profiles of Giba and Taubate.