Jacqueline “Jackie” Joyner-Kersee (born March 3, 1962) is a retired American athlete, ranked among the all-time greatest athletes in the women's heptathlon as well as in the women's long jump. She won three gold, one silver, and two bronze Olympic medals, in those two events at four different Olympic Games. 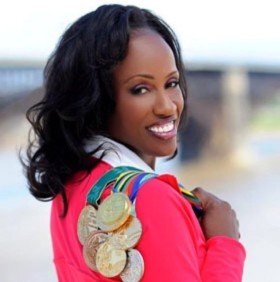 After retiring as a competitive athlete, Joyner-Kersee has been involved with many philanthropic efforts and has joined the Board of Directors for USA Track & Field (USATF), the national governing body of the sport.

Still, the most important achievement of the American athlete is “Jackie Joyner-Kersee Foundation” which she established in 1988 with purpose to provide youth, adults, and families with the resources to improve their quality of life and to enhance communities worldwide, with special attention directed to East St. Louis, Illinois.

In 1986, during a visit to her hometown of East St. Louis, Illinois, Jackie learned of the closing of the “Mary Brown Community Center”, a major resource for youth development, leadership, athletic, and other recreational activities since 1968. The “Center’s” impact on Jackie has been considerable, and, in her mind, a key ingredient in the development of her own character. It helped to create the foundation for her significant athletic successes in track and field and in life. Upon learning that the “Center” was closed, Jackie asked, “What do the youth in the city do now?”

The “Jackie Joyner-Kersee Foundation” remained based in Los Angeles from 1988 until 1995 when it moved to the St. Louis area. Jackie saw the “Foundation” as a broad-based anchor in the St. Louis region, able to provide leadership on many fronts. She set a goal to build a youth center and develop programming to serve youth in the East St. Louis community and joined with a local organization, The East St. Louis Youth Project to turn Jackie‘s dream into a reality.

Under Jackie‘s leadership, the “Foundation” raised over $12 million from a variety of corporate, foundation and government sources and from scores of committed local individuals. The result was the “Jackie Joyner-Kersee Center”, with an initial cost of nearly $10 million, the “Center” was constructed on a 37-acre site adjacent to Interstate 64 and “Kenneth Hall Park” in East St. Louis.

See similar stories in our section After sport’s career.

Bad boy turned into a politician –...