Toniutti's first game for Zenit might also be his last for this club! 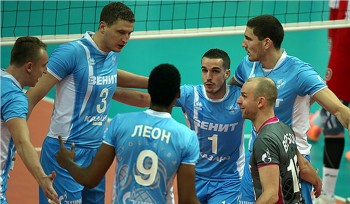 Although Toniutti has not played for Italians in the Challenge Cup, his registration for was active when Champions League started, so European Volleyball Federation decided that he can only play for Ravenna in European competitions in 2014/15 season.

“Yes, we have received such a letter from CEV. We have tried to resolve the situation with a help from French and Russian Volleyball Federations, however we did not get the positive answer from CEV. Next week we will discuss this problem with the coaching staff and the player, and then we will make the final decision about this matter” said Oleg Bryzgalov, Director of Zenit, for Sport-Express.

Benjamin Toniutti debuted for Zenit last weekend in the Russian Championship, but it might also be his last game for the Kazan powerhouse…

Ok, can someone explain to me, how it happened? This is a huge mistake by Zenit’s board. They don’t know the rules of the Champions league or what? So frivolous…

This can happen only on Russia. The player should get all his money, since it is not his problem!!!

why do players always have to change clubs in the middle of the season given that they have club and the contract already? its no longer about sports isnt it?

well Zenit didn’t need the setter, and they obviously didn’t do enough research to see if he was already registered, so it was a waste of time.

Yes, they needed a setter, cause end of the career of Nikola Grbic and replace him with two setters with, to be honest, much much lower level was not a good solution for the club with such a big level!

It’s not always in the players, the agents play their part, too!!!

i think in toniutti’s part.. it was his personal choice to terminate contract with ravenna for kazan because of the reputation of the russian club in every league. plus that kazan is playing in champions league which unfortunately for toniutti that he is not legitimate to take part in it.