The American receiver Matt Anderson extended his contract with Zenit Kazan until the end of season 2015/2016! 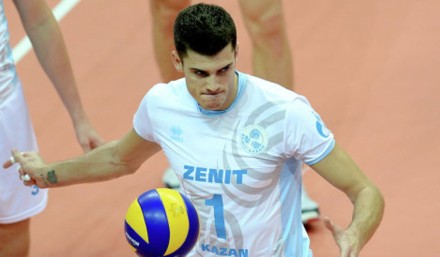 This information published on the official website of the Champions League winners canceled all speculations about his arrival to Italian Sir Safety Perugia, although it was already obvious he won’t go to Italy.

Anderson is in Zenit since 2012 and during that time he played 106 matches in the Kazan team, winning the championship of Russia (2014), the Champions League (2015) and the Super Cup of that country (2012). Iranian setter Saeid Marouf will be a free agent after the end of the current season.

UPDATE: Sesi – “Lucarelli is focused only on the big finals”

I’ve lost all my respect to you Matt.

Depresion is coming to be on again .

I’m afraid Marouf will come back to Iran.

coming back Iran is not so bad!!! he will be with his family and friends and people who love him. he can have very good money too.
Maroof went to Russia for new experience and adventure in the first place. now he’s got what he wanted.

looks like money are the most important thing for him

to all the haters out there, stop being jealous! Matt is a great player and he will succeed with or without your comments, deal with it!

i believe he can fly

i really thought after his ‘depression’ he will come play in the country like Italy or turkey.. i knew money are important for volleyball players because they can’t play forever, but isn’t your health should be the most important thing? i didn’t think he is the money guy. good luck to him, i hope he will not regret it.

Marouf as Iranian wion’t get permission to play in Poland or Italy.

Marouf will get a good price in Iran after success in Russia and he will get back to his homeland!

Ask his goverment. He had some offers from Italy or Poland before he go to Zenit but they didn’t agree.

maroof didnt agree to go Poland by his own! because he had very good conditions in Iran. noting to do with goverment!!!
If he still thinks that way- thinking about money and Comfort- he will come back home.other wise, Poland will be a good choice.

Nobody is against his coming back to Iran. But i’m just saying what i heard. I’m journalist. The same was about Mousavi in Italy.

@M : I dont know where you are from, but i live in Iran. what you heard is not true. they dont have any problem to go abroad for playing. it’s just about good conditions which they have in Iran and they cant have it in another country.
moosavi recantly said in an interview that: ‘ I had offers from another clubs, but im not at age that i can accept any offer with any conditions. if i was 21, I would accept abroad offers and it would be fun, but im not.’

@M Why they should go out of Iran when here they are gods, people love them, they play strong league and take good money?

@anita : you are almost right, but they shouldn’t care so much about money! we have very good players in iran, maybe better than some famous players in the world. but iranian league is not popular and so the world doesn’t know them. i think younger players should go abroad, not care about money and think about experience and getting famous. aftar that, they can think about money. surely they can earn more much money when they get famous and experienced.

Well, I don’t see Marouf in Poland. players do not have a lot of money, so that’s the reason why players like Marouf don’t want to play here.
i want to say, Anderson shouldn’t stay in Russia. turkey isn’t good, too. Players in Turkey play only for money. There aren’t many volley fans. Have a good day : )

When we compare money in Poland or Italy to Iran OK but still the level of competition is higher than Iran, there are lot of good foreign players and local players, better coaches, better organization just another life. For one year they should try but very often players like Marouf are so overrated and for price he took he wasn’t worth it what he showed, a lot of noise after one good season in national team and? he didn’t perform better in champions league than Drzyzga. If he played good Zenit would like to continiue with him. I can point you players better for now than Marouf and costs much less than Marouf: Bruno, De Cecco, Uriarte, Drzyzga, Toniutti, Butko, Zagumny. Wilkzlasu really money they earn are similar to their level?
Think also about Milijkovic how much he earn and how he plays (with all my respect to his past). How many are better attackers than Milijkovic and they earn less? Very often surname earn, not game.

I would love to see players like Mousavi, Ghaemi or Ebadipour playing in Europe, but I doubt that there will a posibility..they feel to comfortable in their domestic league.

Iran has got a very strong volleyball league which is not very known to volleyball’s fans, unfortunately. However, after the extraordinary performances of Iranian players in world league as well as world championship in 2014, many of volleyball players and fans is getting more exposed to the Iran’s volleyball league. I don’t agree that Iranian players are not allowed to play in Italy or Poland due to political issues.
Further, the offer from Zenit club was good enough to persuade Marouf to leave Iran. Zenit had got a great potential to be the champion of CEV, so Marouf appreciated this opportunity and Joint Zenit last year. I think he got what he wanted in his journey to Russia.
Marouf is one of the best setters in the world, and he earned this quality and skill when he was playing in Iran. So I believe Iran’s volleyball league is a good place for identifying and fostering talented players like Marouf, Mousavi, Ghafour, Ghaemi, and other beloved players.
http://www.worldofvolley.com/News/Latest_news/Othercountries/50454/maroufs-one-handed-set-for-a-pipe-video.html

That what you have told was perfect. Really true

All of the persons who know the volleyball,should believe that Mr.Marouf is a dominant and professional player.