OG M: Russia come from behind to win Olympic title after 32 years, Brazil and Italy get silver and bronze

The last day of action of the men’s volleyball tournament at Earls Court provided all fans with the right climax deserved by an Olympic final where Brazil initially set the pace of the game but eventually could not capitalize on two opportunities to seal the deal in straight sets. 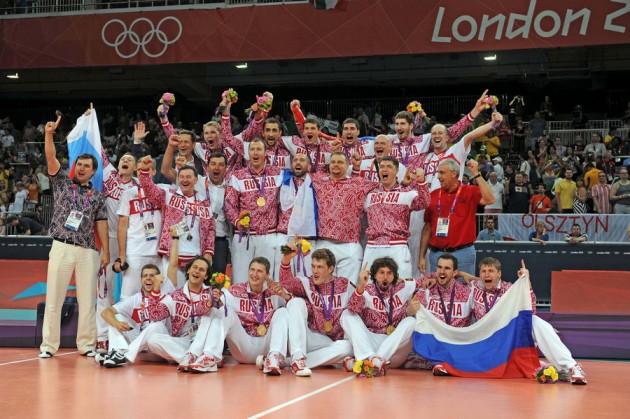 Dmitriy Muserskiy turned into the match winner for Russia as he was moved by coach Alekno to play as opposite starting from the third set and eventually amassed 31 points to anchor his side to the first Olympic gold medal since 1980. Italy eventually completed the podium by edging Bulgaria 3-1 in the classification match played earlier on Sunday morning.

After two and a half sets the script of the final match in the men’s Olympic tournament was almost completed, with Brazil likely to cruise to their third title, but the South Americans eventually missed out on two match balls before Russia clawed back anchored by a stellar performance of Dmitriy Muserskiy to eventually win gold 32 years after the glorious days of Moscow. This 3-2 win (19-25, 20-25, 29-27, 25-22 and 15-9) will remain forever associated to giant Dmitriy Muserskiy since coach Vladimir Alekno revolutionized his starting six in set 3 by moving Mikhaylov to wing spiker while Muserskiy took over as opposite. The 217 cm tall player of Lokomotiv Belgorod literally changed the course of the game as he scored 31 points all alone and he anchored his side to a success that the local volleyball family had been waiting for a long, long time. With this win Russia improved their Olympic record with Brazil to five wins and four losses, extending their lead in the all-time medal tally with 10 medals (four are gold), as Brazil moved up to five, with two gold and three silver. Even though Russia had not stood on top of the podium since 1980, they still had medalled in each edition of the Olympics since 1964 with the only exception being Barcelona 1992 and the Centennial Games celebrated in Atlanta in 1996.

Similarly to what had happened in the previous editions of the Games, Italy could not fulfil their dream of Olympic gold in London but finally were still happy to claim their fifth medal in history after edging Bulgaria 3-1 (25-19, 23-25, 25-22, and 25-20) in the classification match that opened the program of the last day of action at Earls Court. This honour is to be added to two silver medals (1996 and 2004) and bronze (1984 and 2000) already included in Italy’s showcase and confirms that the group put together by head coach Mauro Berruto is solid and may have some good perspectives also for the future. As for Bulgaria, the real surprise of the Olympic tournament probably ran out of fuel after a few demanding matches and eventually could not play their best, settling for fourth and missing out on the Olympic podium. Ivan Zaytsev could successfully start his chase to emulate dad Vyacheslav – a gold medallist back in 1980 but for the Soviet Union – by taking a medal right by his first Olympic appearance. As for the game in itself, Italy were anchored by a stellar performance of their captain Cristian Savani who amassed a haul of 23 points including 7 aces to leave his mark on the match. The result totally reversed the 0-3 defeat Italy had suffered to Bulgaria in the prelims, testifying the gradual improvement that was achieved by the “Azzurri” throughout the Olympic tournament.