For the first time ever, a team which was down 2-0 in an Olympic final fought back to win gold. In the middle of the Russian court, clearly knowing that those were his last minutes with the Russian flag on his jersey, was standing one of the volleyball heroes of the London Olympic Games. 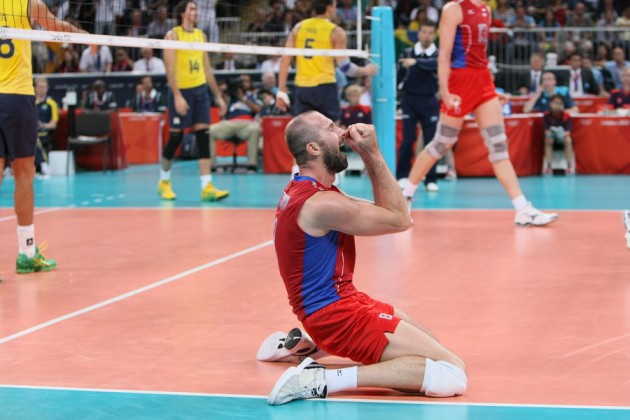 The 36-year-old spiker Sergey Tetyukhin entered on Sunday the gotha of the volleyball Olympian with four medals, together with Italy‘s Samuele Papi, the Soviet Union’s Inna Ryskal and Cuba‘s Ana Fernandez.

“Now the emotions are lying still on the court out there. I think that in two or three days we will fully understand how we were able to win this final,” Tetyukhin, who had previously won silver in 2000 and bronze in 2004 and 2008, said after the tough match which extended Russia‘s lead at the top of the medal tally to 10 (4G, 3S, 3B), ahead of Brazil on five (two gold and three silver) and Italy (two silver and three bronze).

In October 2000, while playing professionally in Italy, Tetyukhin‘s career was put at risk after a car accident he sufferred with Roman Iakovlev, at that time opposite hitter of the Russian team. He broke his pelvis and it took months to recover. His Parma club was forced to substitute him by registering Hugo Conte, the father of Facundo who played for Argentina in London. But after all those days at the hospital he was back, continuing an outstanding career and targeting the record of Olympic medals. Until his utmost at Earls Court.

“Some people in the stands did not believe in us,” he explained. “During the final they turned their back and went away after the second set. But those who trusted, they are the most valuable. I think we have shown our character.”

He was a sparring partner, playing on the other side of the net during the trainings of coach Vladimir Alekno’s starting six before London. But you can’t keep a lion in a cage too long. In the final his experience – he is the most expereinced of all the players playing at London 2012 with four editions under under his belt 1996 to 2008 – was a winning factor for his team: he scored 12 points, acting as the best server of Russia, too. It was a fantastic match for an impressive collective.

“We always have a strong team at the Olympic Games,” Tetyukhin said. “I played five times at the Olympics. I think that for four times we had a team capable to win the gold medal. The only time that we were weaker, compared with our opponents, was in Atlanta. At that time Italy and the Netherlands were far too strong for us.”

So now the lion will quit. “I knew we could win the gold. Otherwise I would have never tried to be here, I should have quit the national team before. But now I got this (he shows his gold medal hidden under the training suit). Now I can leave my team.”

OG M: Russia come from behind to win Olympic title after 32 years, Brazil and Italy get silver and bronze