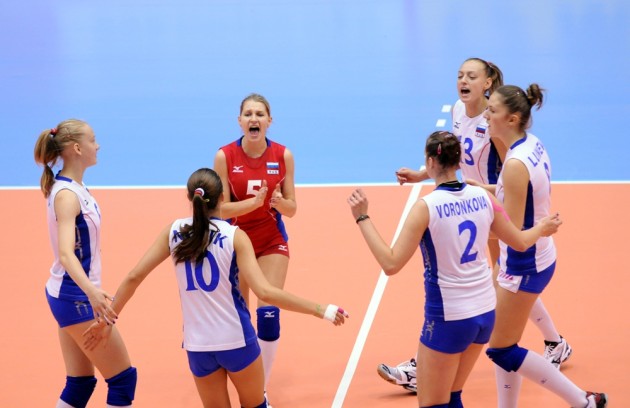 Although Bulgaria made life difficult for their opponents, mainly in the first set, Russia finally prevailed. Bulgaria couldn’t keep the pace they showed in the beginning of the match. Russian outside hitter Kseniia Ilchenko topped the scorers with 20 points including 5 aces. Irina Voronkova helped her side with 19 kills. Bulgaria made 18 reception errors. Russia made an impressive start into the game and forced Bulgarian head-coach Radoslav Bakardzhiev to call an early time-out at 2-6. It helped as Bulgaria came to life again and led 8-7 at the first technical break. Russian setter Elena Novik served two aces to move the scoreboard in Russia’s favor. However, Bulgaria never looked back. Wing-spiker Gergana Dimitrova finished the set with an ace for her side (25-21). Both teams still played on a high level at the start of the second set. Still, Russia seemed to display more power and determination. As a consequence, the Russian powerhouse already led by seven points at the second technical break. There was not much to do for the Bulgarian team to stop the tall Russian hitters (16-25). Russia kept the duel under control in the third and fourth set to finally claim a well-deserved win in their second appearance in Ankara.
Bulgarian head coach Radoslav Bakardzhiev mentioned after the game that this match was almost the same as the defeat they had suffered on Saturday. Bakardzhiev said: “Russia fought back bravely and put a lot of pressure on our team. We need to stay more focused.”
Russian head coach Svetlana Safronova added: “We acted like a wave today. There were many ups and downs in our game, but fortunately we managed to win.”

The classic powers Italy and Serbia, host Turkey as well as Russia, Poland and Germany are the favorites for the crown of the prestigious CEV under 19 age category competition. Two weeks before the men’s juniors will battle for medals in Denmark and Poland, Turkey is in the spot light for the prominent CEV event at Baskent Hall that hosts Pool I and Ahmet Taner Kislali Hall featuring Pool II. A total of 38 matches are played during the tournament, running from August 18-26.