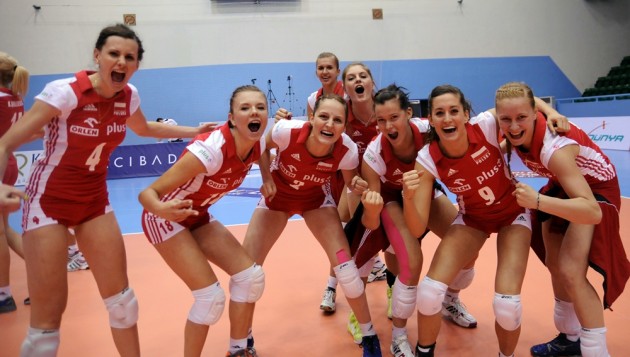 It was the first major surprise of the 2012 CEV Junior Volleyball European Championship – Women when Poland crashed titleholder Italy in straight sets (27-25, 25-20, 25-20) in today’s fifth match of Pool II. Except for the first set, Italy never had a chance to overcome the strong Polish squad. Polish middle-blocker Agnieszka Kakolewska topped the scorers with 14 points, including 3 aces and 4 block winners. In the middle of the first set, Italy bounced back from 12-16, but couldn’t conclude their set ball at 25-24. Three Polish points in a row offered the girls in red and white jerseys the first set in extremis. Poland gained momentum and quickly led 6-1 in the beginning of the second set. Italian head coach Marco Mencarelli called his ladies off court to have a serious talk. However, it didn’t help as the Polish express moved on. Italy never gave up, but couldn’t find a way to stop the strong Polish squad (25-20). Two sets down, the titleholders led 8-7 at the first technical time-out in set No. 3. However, Poland kept cool, continuing their run until the end of the match (25-20). After yesterday’s win versus the Czech Republic, it was the second triumph for the promising Polish squad.
Polish head coach Andrzej Pec stated after the game: “We perfectly prepared the match and it was the key for the win. We also served very well.”

POL W: Bielsko-Biala will not participate at...