Zenit Kazan defeated Al-Arabi Doha 3-1 in Pool B of the Men’s FIVB Club World Championship at Aspire Zone Hall on Sunday. Evgeny Sivozhelez topped the winning side with 22 points, and Christian Pampel finished with a match-high 23 points for Al-Arabi. 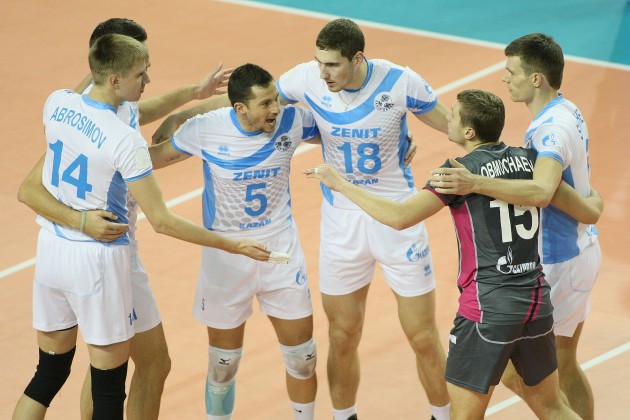 Evgeny Sivozhelez topped the winning side with 22 points as three other teammates also scored in double digits. Matt Anderson and Maxim Mikhaylov added 16 and 15 respectively while Nikolay Apalikov contributed 10.

Zenit Kazan held 9-7 and 4-3 advantages in the blocking and service winners departments. The winners made 25 unforced errors to 30 by the defeated side.

Consecutive spikes by Abrosimov, Mykhaylov and Anderson gave Zenit Kazan a 4-2 lead in the first set. The Russian club was in front 8-5 after the attack by Apalikov down the middle. When action resumed, Al-Arabi’s Pampel and Mykhaylov traded kills. At 9-7 Anderson hit a formidable spike from the back court. Ibrahim scored a massive spike but Anderson hit one even harder for 15-11. Anderson then hit one errant kill followed by an unforced error and Al-Arabi closed within two points. Apalikov planted one from the centre for a 16-13 lead at the second technical stop. Ribeiro Renan was very active for the local side. Pampel was blocked by Sivozhelez and Al-Arabi called for time out trailing 20-16. Al Bahkhet scored twice around a point of Zenit and Anderson followed with a bomb for 23-19 but then he was too long with his serve. A block by Pampel closed the score at 23-21. Pampel scored with a subtle touch but Sivozhelez closed the action with his spike for 25-22.

Anderson and Ribeiro exchanged kills for a 3-3 tie in the second set. Sivozhelez attacked for a 7-5 but Al Bahkhet answered from the other side and Oivanen aced with his serve for a 7-all tie. Ibrahim gave Al-Arabi an 8-7 lead. Sivozhelez and Mykhaylov scored in consecutive plays for a 14-12 advantage of Zenit Kazan. Pampel hit an excellent cross court shot and then planted one from the back court to tie the score at 14-all. Pampel served long and Oivanen attacked from the center. Sivozhelez broke the tie for a 16-15 difference. Mikhaylov reopened action with an ace. Zenit Kazan opened a three-point lead after another kill by Sivozhelez and Al-Arabi called for time out trailing 23-20. Apalikov served long but Anderson attacked from the back court for set-point. Pampel reacted with a cross-court spike and setter Vermiglio ended the action with an effective disguise touch and a 25-22 score.

Pampel scored with a right-hander spike for a 5-3 Al-Arabi lead. Vermiglio and Boninfante traded brilliant points as setters. Al-Arabi was in front 8-6 following the quick attack from middle blocker Ibrahim. The two-point difference stayed the same until Ribeiro scored from the left side for a 13-10 margin. Zenit Kazan reacted to tie at 14-all. Pampel gave Al-Arabi a 16-15 lead at the second technical time out.  Mikhaylov evened the score at 18-all with an ace. Al Bakhet landed a missile followed by his team block for a 21-19 advantage. Zenit Kazan called for time out. Oivanen blocked Mikhaylov for a 23-20 lead. Sivozhelez scored with his spike and Oivanen’s attack as Zenit Kazan closed in by one-point. Apalikov blocked Al Bahket for a tie at 23 and Oivanen hit a laser shot for set-point. Anderson then tied at 24-all. One error of Al-Arabi defense gave the lead to the Russian team but this time Al Bahket attacked cleanly. After a long battle, Oivanen’s splke was good down the middle and Mikhaylov’s attempt sailed long for a 31-29 in favor of Al-Arabi.

Sivozhelez and Anderson started with spikes for a 2-0 lead of Zenit Kazan in the fourth set. Oivanen blocked Anderson to cut the difference to 4-3. The Russian club led 8-7 at the first TTO. The offensive attempt of Ibrahim was long and Sivozhelez answered with three straight kills for a four-point lead 12-8 advantage. Ribeiro scored twice for Al-Arabi but once again Sivozhelez was present for his side. Zenit Kazan led 16-10 after Pampel crashed his serve into the net. Mikhaylov kept the distance safe with a couple of spikes. Al Bakhet served two straight aces to close the score at 22-18 and Zenit Kazan’s coach called for time. Al Bakhet served long and Mikhaylov answered with his own ace. Zenit Kazan won 25-18.