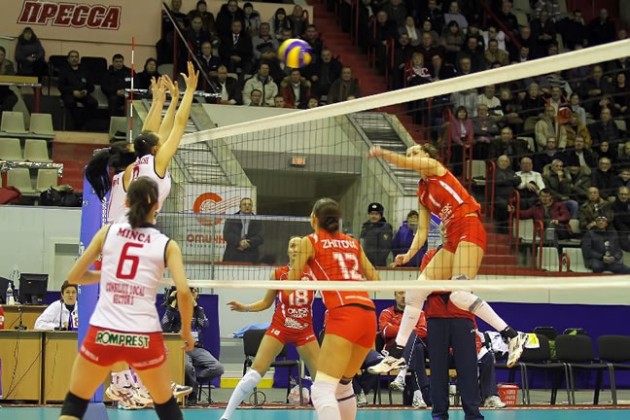 The campaign of the group mentored by Vladimir Kuzyutkin started this past December with two wins in straight sets to edge Cyprus TRB-Danoi AEL LIMASSOL. If they win the return match scheduled for next week in Romania, the girls from Siberia will play in the next round the winner of the clash opposing VC WEERT of the Netherlands and ZOK Jedinstvo BRCKO from Bosnia and Herzegovina.

“I want to thank the authorities of the Omsk Region for their warm hospitality and also congratulate Omichka for their win tonight” says Dinamo mentor Branko Kovacevic. “I am satisfied with the performance of my young players and I hope next week in Bucharest we will have the complete group and make the match a little more dramatic. Anyway, the Romanian national league remains our absolute priority for this season”.

“I am satisfied with the result but not with the way we played” says Russian mentor Kuzyutkin. “We have a very tight schedule and no time to train, so I am afraid that the players are getting tired also psychologically. We have a good starting position for the return game in Romania but we know Dinamo will be much stronger there, being also reinforced with other players that did not come to Omsk. We never play to lose, so we assign the same importance to the national league and the Challenge Cup but we have to distribute our energy across the many matches we have. This schedule is terrible, especially mentally speaking, and our reserves are not yet ready to take over some games. I still hope we can stand it and bring some more joy to our fans” he concludes.