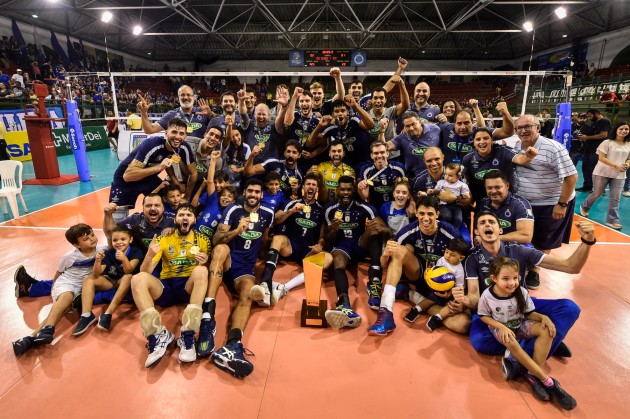 Playing at home at the Ginásio do Riacho in Contagem, Brazilian Cruzeiro added one more title, seventh in total, of the continental championship, beating Argentinean side UPCN in the final of the 2020 Campeonato Sudamericano de Clubes by a 3-1 (25-18, 14-25, 25-19, 25-23). This title guarantees the “Fox” (Raposa) a place in the next FIVB Club World Championship that will be held at the end of the year.

UPCN scared Cruzeiro only in the second set when the Minas Gerias side committed as many as 11 errors and let rivals tie at 1-1. With 20 points, Argentinean Facundo Conte was the top scorer for Cruzeiro in the final. The setter of the winning side Fernando Kreling “Cachopa” was named MVP.

Cruzeiro became the most titled team in the South American Club Championship already last year when they won its sixth crown in the competition, also by defeating UPCN in the final. This was the 37th trophy for Cruzeiro since the moment Argentinean Marcelo Méndez took over their bench in 2010.

The bronze medal went to the Brazilian champions EMS Taubaté Funvic, who beat Bolívar Voley from Argentina in four sets.

BRA W: In direct clash for No.4, Bauru beat Osasco in straight sets

PER W: One of the hottest South...