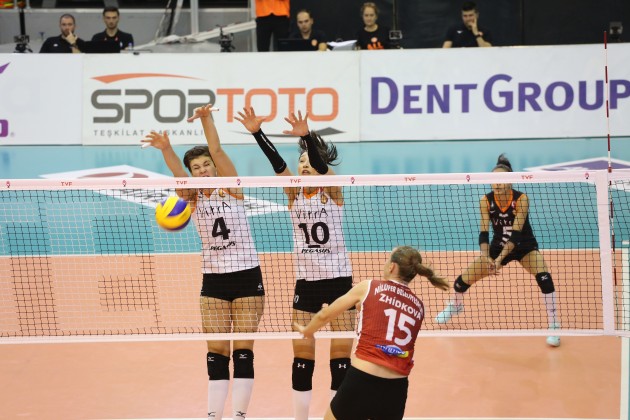 Unlike the first-round match against Beylikdüzü Voleybol İhtisas, the head coach of Eczacıbaşı VitrA, Marco Aurélio Motta, used all weapons that he has at disposal, which means that stars like Bošković, Kim and Gibbemeyer made their debuts in the 2019/20 Vestel Venus Sultanlar Ligi. The Brazilian expert even tried a little experiment by moving Melis Durul from an opposite to the outside hitter’s position. Serbian Tijana Bošković was the top scorer of the game with 23 points (4 kill blocks), while Beyza Arıcı made 5 kill blocks. As for Nilüfer, Belgian Hélène Rousseaux scored 14 points.

The Greek newcomer to Galatasaray HDI Sigorta from Lardini Filottrano (Italy), Anthi Vasilantonaki, led her team to a straight-set win against Karayolları.

Despite playing without two very important players like Robinson and Vargas (she was in protocol unlike the first round match), Fenerbahçe Opet swept Beşiktaş. Recall that Vargas’ Instagram was, allegedly, hacked this summer and those who took over her profile wrote that she will no longer wear the jersey of the “Yellow Angels”.