CEV CL F: Eczacibasi moves to next round after five-set thriller

Even though they had quite impressed last week in Italy, the home heroines of Eczacibasi VitrA ISTANBUL did not have it easy at all on Thursday as they played their return match for the Playoffs 12 against AsystelCarnaghi VILLA CORTESE where they had the upper hand after a dramatic five-setter (25-20, 15-25, 25-17, 15-25, and 15-9) to advance to the Playoffs 6 of the 2013 CEV Volleyball Champions League – Women. Read latest volleyball news on Worldofvolley.com. 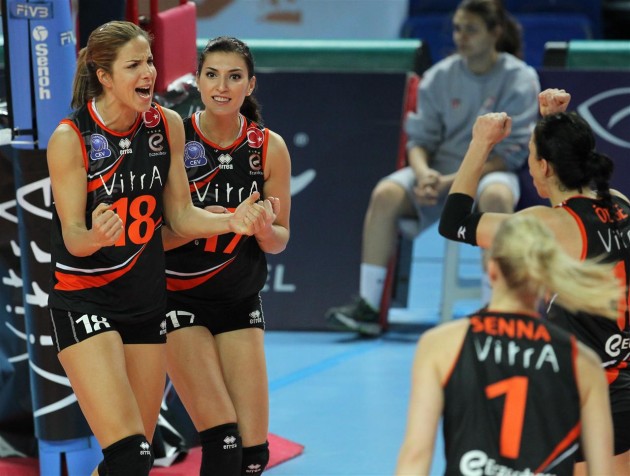 Both teams started out very concentrated and even though Eczacibasi set the pace by the first technical time-out (8:6), VILLA CORTESE stormed back to draw level at 11. Lioubov Shashkova re-opened the gap for the home side (15:12) and Eczacibasi got a margin of three as the second technical time-out was called. The head coach of VILLA CORTESE, Gianni Caprara, asked for a couple of stops and opted for some substitutions but the margin was steadily widened by the home heroines (19:13) that could eventually seal the final 25-20.

After Neslihan Darnel got injured in the early phases of the second set, Eczacibasi head coach Lorenzo Micelli opted for team captain Esra Gümüs but VILLA CORTESE dictated the tempo of the game all the way through there (8:6, 12:8), 16:11). Micelli changed setter with Asuman Karakoyun replacing Özge Cemberci Kirdar but even the return of Darnel could not stop the Italian march (25-15) anchored by youngster Caterina Bosetti who scored 6 points in this set.

The start of the third set was very close (7:7) before Darnel helped the home side move to the front (11:8). Even though Alexandra Klineman replaced Natalia Viganò, Eczacibasi played with evident confidence (14:9) before VILLA CORTESE fought once more their way back to level at 14 all. Two points scored by Shashkova and Maja Poljak made it 16:14 for Eczacibasi and some good serving did stretch that lead (19:15), practically paving the way for the final 25-17.

Eczacibasi went up 8:7 in the fourth set but some problems in reception affected the quality of their game and VILLA CORTESE cruised to the front with a margin of five by the second technical time-out. Gümüs replaced Shashkova and Senna Usic Jogunica was substituted by Buse Kayacan but still VILLA CORTESE dominated the scene (19:12) calling for the tie-break only a few moments later (25-15).

VILLA CORTESE opened the deciding set with a splendid 3:0 break to force Eczacibasi into an early time-out. This helped the hosts fight back and flip the charts around (5:4) and a very solid block-and-defense system contributed a small lead for the local heroines (8:5) as teams changed side of the court. Neslihan Darnel widened the gap (10:6) with a series of good serves and after that Eczacibasi was no more to stop (15-9) claiming that much desired ticket to the Playoffs 6.

Maja Poljak top scored for the home side in the end with 17 points while Klineman topped the charts for VILLA CORTESE with 19.

“We knew that VILLA CORTESE could play much better than they had done last week in Italy and they eventually did. However, I am happy we were able to bring it home before the golden set” says Eczacibasi head coach Lorenzo Micelli. “We will now start our preparations for the next round which will be tough too”.

“It was a real thriller and I do hope we’ll play much better in the next round” concluded home star Neslihan Darnel.

TUR M: And they say nothing can...