On Thursday afternoon Turkey’s sensation Maliye Milli Piyango ANKARA downed the Czech national champions of Jihostroj CESKE BUDEJOVICE in straight sets (25-22, 25-18, and 25-16) to make it to the semis of the 2013 CEV Volleyball Cup – Men and play there the winner of the clash starring Andreoli LATINA and Generali UNTERHACHING. Read latest volleyball news on Worldofvolley.com. 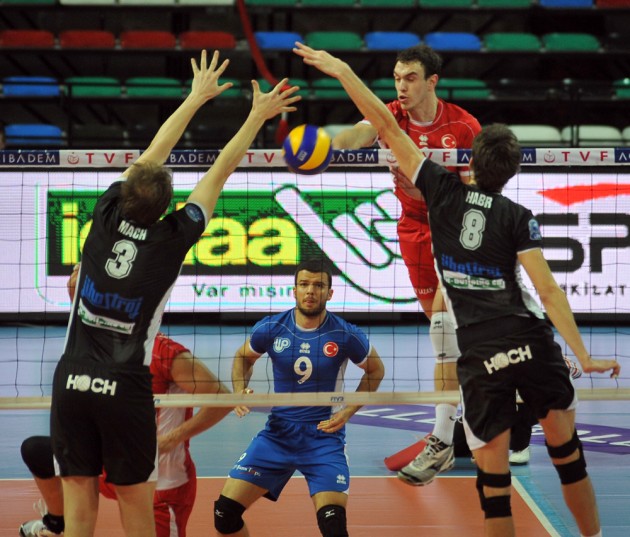 The Czechs had traveled to Turkey without their best player – Peter Platenik, currently injured – and definitely were not in the position to have it easy to compensate for last week’s 1-3 home defeat. At the end of the game Marko Ivovic topped the charts of the best scorers for the home side with 17 points well supported by Nikola Gjorgiev with 13 as the team from Turkey’s capital city made the difference especially with their solid and impressive blocks.

The Czech coach Jan Svoboda called for his first time-out as Milos Vemic had opened the gap (11:8) for Maliye Milli Piyango and even though the Czechs tried their best, the home heroes could easily impose their supremacy all the way through (16:13 and 25-22 in the end).

Things did not change also in the second set where the local favorites rushed to the front (6:3 and 12:6) as Jihostroj could not find their tempo; Marko Ivovic paced the offensive play of Maliye Milli Piyango (16:10) and the provisional 2:0 was quickly stamped on the scoreboard (25-17).

Even though they initially trailed 2:4, the home heroes turned the score around via a series of great blocks by Ibrahim Emet and they did not lose control of the operations anymore going for a well-deserved 3:0 win (25-16).