Turkey: Halkbank is preparing for the match with Galatasaray

On Sunday Halkbank will play in the match with Gatalasary in First Volleyball League for Men, the leader continues with preparations incessantly. 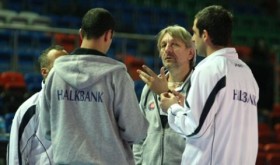 Halkbank is preparing for the match with Galatasaray

Halkbank continued with leadership winning in the past week with 3-0  over Torul Gençlik  and is preparing to fight with Galatasaray on Sunday 5th.

With 11 wins and 3 defeats in 14 games played in the capital in the tournament, it is currently with 36 points on the scoreboard.

The players’ performance is administred by the coach Veselin Vukovic.

Despite a very short period of time passed since his appointment, he already notices the players’ shortcomings in the team and warns his players one by one.

By the way, Vukovic who was born in 1954 in Montenegro, trained Slovenia’s national team players and was the coach of Grbic brothers, Ivan Miljkovic and Andrija Geric, who are known as the world-famous volleyball players.

The member of Board of Halbank, Selahattin Süleymanoğlu shared his opinion about Slovenian coach “For our teacher career is very important. This season our team has been very successful. Moreover, Halbank is the leader in Aroma men’s volleyball league. However, the end of the tournament in Leaue is important as I always say. I think these players and the technical committee can achieve it,” he said.

In a very hot environment in Turkey, the Slovenian coach Veselin Vukovic, said : “Here I am happy. We want to be successful with our team, ” he said.

Halkbank and Galatasaray will struggle in the game in 15 Aroma League for Men on Sunday February 12 at 17:30 in the Volleyball Hall in the capital.