Lausanne, Switzerland, February 10, 2012 – The International Volleyball Federation (FIVB) is pleased to announce the official host cities and dates for the FIVB Volleyball World League 2012, with the premier annual men’s volleyball tournament set to take place from May 18 to July 8. 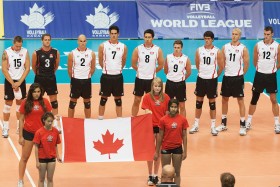 For the first time in the tournament‘s history, which dates back to 1990, all four teams in each pool will play at one host city on a weekend, with each country taking turns to host all four teams in their respective pools.

Like 2010, the Finals will feature six teams, with the four pool winners and the best runner-up joining Finals hosts Bulgaria in Sofia.

Weekend one will see Japan welcome defending champions Russia as well as Serbia and Cuba to Hamamatsu in Pool A while Canada, returning to the tournament for the first time since 2006, host 2011 silver and bronze medallists Brazil and Poland respectively along with Finland in Toronto in Pool B.

The Italian city of Florence sets the stage for Pool C as the hosts take on USA, France and Korea.

Teams in Pool B will then see three weekends of action in a row, with the second round taking place from June 1 to 3 in Katowice, Poland, before moving to San Bernardo do Campo, Brazil for the third round a week later from June 8 to 10 and finishing in Tampere, Finland from June 15 to 17.

The pool winners will become the first team to join Bulgaria in the Finals.

Pool A, C and D begin their second rounds on the same weekend in Havana, Cuba; Lyon, France and Buenos Aires, Argentina respectively.

With Pool B having concluded, the remaining action in the third round will take place from June 22 to 24 with Kalingrad, Russia hosting Pool A, Gwangju, Korea the setting for Pool C and Guimaraes, Portugal welcoming teams from Pool D.

The remaining pool winners and best runner-up will then be decided from June 28 to July 1 on the final weekend of the Intercontinental Round with Pool A in Novi Sad, Serbia, Pool C in Dallas, USA and Pool D in Sofia, Bulgaria.

The Finals will then take place from July 4 to 8 with the six teams (reduced from eight in 2011) split into two pools.

The top two teams from each pool will advance to the semifinals.

Turkey: Halkbank is preparing for the match with Galatasaray