SVS Post Schwechat stays on track towards winning the qualification round of this season's Middle European League Women. 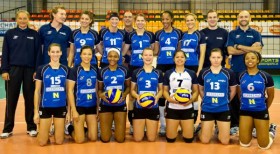 On Thursday at the Multiversum hall in Schwechat the serial champion from Austria was able to defeat opponent ZOK Vukovar in only 65 minutes at 3:0 (25:15, 25:9, 25:21), thus celebrating the 11th victory in 13 encounters.

Even without setter Ivana Zburova, who suffered a cruciate ligament tear last Tuesday in the European cup encounter vs. Krasnodar, SVS Post was clearly the predominant team from the beginning.

“We could use all players. The team was completely unimpressed by Zburova’s injury. If we score a victory in Sunday’s match in Rijeka, we cannot be pushed from the top of the ranking anymore“, explains Peter Eichstädt, managing director of SVS Post.

This means that currently Doprastav lags only 1 point behind Slavia and two matches less played.

The girls of Askö Linz-Steg (7th) finished their MEL season with a victory.