The eleventh edition of the Sultani Ball was held on Wednesday night at Kalamis, the headquarters of Turkey’s legendary sports club Galatasaray. The roots of Galatasaray high school date back to 1480 as the institution was founded by Sultan Beyazid II and that school where originally the senior officials of the Ottoman Empire were educated went through many changes throughout the past centuries. 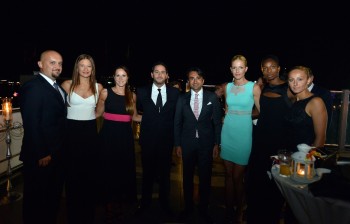 Originally it was a boarding school where students from different regions of the Ottoman Empire first and afterwards from the Republic of Turkey were hosted and received high-class education. Its premises have since been transformed into the headquarters of Galatasaray University while the high school was moved to Beyoglu district.

Every year its alumni organize gala dinners and balls whose income is used to finance a series of scholarships for student wanting to enrol and attend that exclusive boarding school. This year’s gala and ball was opened by a speech given by the President of the Alumni Association, Polat Bengiser, and then continued by showing images of the Galatasaray University building that was destroyed by a fire this past January 23. The gala was rounded out by the performance of a famous composer and singer, Galatasaray SK Board member Candan Ercetin.

The Volleyball division of Galatasaray SK attended the gala being represented there by players and officials. The captain of the women’s team sponsored by Daikin that is set to compete once more in the CEV Volleyball Champions League, Eleonora Lo Bianco, said:

“We are evidently pleased to be here and be part of this family. This was a great night surrounded by a magic atmosphere and we are glad to show our support to this cause. This is a huge family and we are here together to keep up with our traditions. I am proud to be part of all this” – said the team captain of the men’s team, Ibrahim Emet, interviewed by Galatasaray TV.

To read more news from this country Turkey.