It is well known that the HalkBank players are doing a good job this year in Turkish championship, Turkish Cup and are also about to play the final tournament of the CEV Champions league. But it's also no secret that most of the HalkBank players would feel much better if they could go back to Italy next season to play in the Italian Championship. 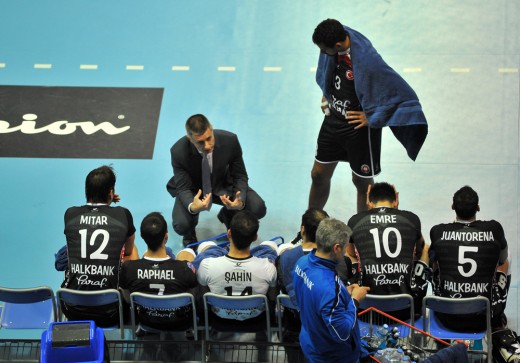 In each statement of Kaziyski, Juantorena and specially Stoychev you can see a little lament of the Italy, with tendency to come back some day. Will that happen next year?

It is true that it is not easy to play in Turkey. The level of game is far away from the level these guys are used to play in Italy. The mentality is different and also the volleyball organization is at its beginnings.

After some other volleyball reality, it takes time to get used to all this.

Ex players of Trento (including coach) still have a valid contract with Italian club, and they are just on loan in HalkBank. As Juantorena confirmed in previous interview for WoV, he’ll try to wait until the end of the season to evaluate the proposition of Ankara’s club and to decide where he will play in the next season. But, it doesn’t depend only on him.

The economic situation in Italy is not so brilliant and the contracts of Juantorena, Kaziysky and Stoychev are 2 or even 3 times higher than the best volleyball contract in Italy at this moment. And it would be really irresponsible for one team to give them such money (or even little less) to come back to play in Italy.

Also, would other players accept them? How would the other players from the team accept teammates who take 10 or even 20 times more money than them? It takes 7 players to play, not only 1 or 2. But many times presidents don’t think about that…

Also, it looks like Stoychev and Kaziyski go together everywhere, like tandem. Who goes with whom, it’s not known, but if you take a look at the last 7-8 years, starting from Bulgaria, Russia, Italy and now Turkey, they have always been in the same team. Rumors speak about that every time one of them is about to sign a new contract, it includes another one like “package”.

Beside the economic issues, let’s take a look about the possible club solutions:

Lube started the year with loss in Italian Supercup. During the whole season team had problems with injures, and the last bad thing that has happened is the elimination from Italian Cup, where they lost against “brave” Sir Perugia and Atanasijevic. Giuliani has been coaching Macerata since 2011, but after the last disappointments maybe the club will think about the change.

With latest happenings inside the club (some owners left) and with problems on the relation between coach Lorenzetti and the players because of bad results lately  (with some new players arrived lately like Ngapeth and Bruninho and some players injured), it can be that the owners can think about the experienced Stoychev–Kaziysky solution.

Will they come back in Trentino? Juantorena and others might be interested, but would they accept less money? Juantorena has settled down there, also stated that he would go back there without hesitating, but will club give so much money at this moment?

The team of coach Monty is doing a good work this year playing with a combination of an experienced and young players, but he will finish his contract this year. Will he decide to go abroad and leave a space for a club to search for a new coach? Kaziyski would be a good substitution for Papi or Zlatanov…

Whatever happens, one thing is sure – once again we will see Stoychev and Kaziyski staying in the same club. Or not?

TUR M: Guidetti with WoV even during...