After four years and three consecutive titles for Fenerbahce, Eczacibasi raised the Turkish championship trophy again! The final series between Eczacibasi and Vakifbank was a great volleyball show with long rallys and a lots of drama – and both matches ending with the 3:2 score. 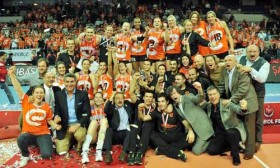 In the last match, Eczacibasi stopped their opponents mainly on net (19 blocks) – and their middle blocker Busra Cansu became the best blocker with 6 blocks. Not being able to kill two match-balls in the 4th set, Eczacibasi has won 15:9 in tie-break.

Despite of being ill as well as two other teammates, Eczacibasi outside hitter Senna Usic became the main offensive force of the champions with 16 points in the first and 21 points in the second final match. Neslihan Darnel did her important job as well (21+16).

On the other side of the court, Malgorzata Glinka was excellent (25+22 points), but supported only by Bahar Toksoy (12+10) and Yelena Nikolic (5+12). After outstanding performance throughout the playoffs, Glinka became the most honored player of the playoffs with the Best Spiker, Best Server and Best Scorer Award.

Turkish Championship is the third consectutive Turkish „cup“ for the Eczacibasi coach Lorenzo Micelli after he has won the Turkish cup last year and Supercup at the beginning of this season. After 33 seasons of Turkish women´s league, this is the 16th Turkish League Championship for one of the main women´s volleyball clubs.

Eczacibasi finished the regular season on the 2nd position with 2 defeats(against Fenerbahce) and 20 victories.

Eczacibasi managed to defeat Vakifbank three times during the final playoffstournament (once in a group match) – and it seems to be a sweet revenge after Vakifbank eliminated the orange „Tigers“ from this years Champions League!

Their relationship has never been perfect, but now Fenerbahce Universal club officials feel some extra bitterness against Turkish Volleyball Federation after their team got eliminated from the playoffs after only one semifinals defeat in the whole 2011-12 season.

In their seeking for justice, Fenerbahce publicly criticized TVF in media for the playoffs system when teams play only one match in semifinals and 2-3 matches in finals instead of a longer series of matches – simply due to chaotic schedule where was not enough time left before the FIVB Olympics Qualifications training camps start.

And not only that – there is already no time to play women´s Turkish Cup finalsbefore the national team camps! Many foreigners will have to leave their teams or already left (f.e. Fenerbahce) without taking part in this competition…

Also new rule of 12-players roster closed before the playoffs without possibility of any changes during playoffs makes clubs angry. „If my foreign player gets injured, why I should not use another foreigner from my team,“ Fenerbahce manager Hakan Dincay asked. „Why I transfer expensive volleyball world stars when I can not use them?“

The same problems and disputes are being expected during men´s playoffs which will start on April 16th in city of Canakkale.