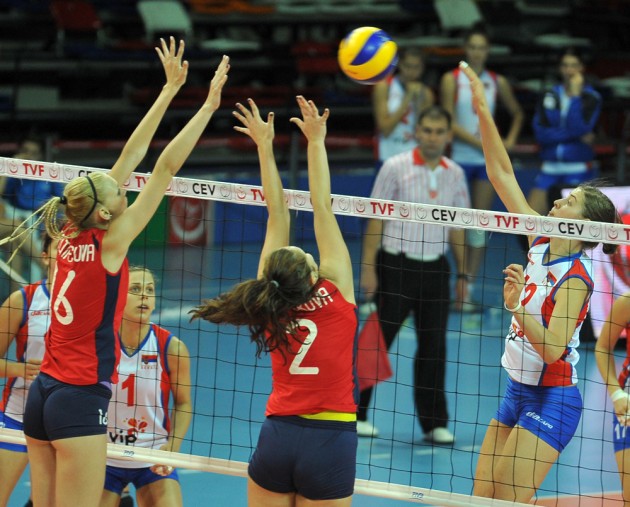 In tonight’s last duel in Pool I, Serbia crashed Slovakia in straight sets (25-20, 25-13, 25-12). The Slovaks suffered a lot against the well placed Serbian blocks. Although Slovakia started well into the first and second set, Serbia was able to turn the tables twice. Serbian opposite Nina Cikiriz topped the scorers chart with 14 points. Captain Bianka Busa helped her side with 12, including 3 block kills.

Slovakia started courageously and put some pressure on the Serbian receivers. However, Serbia managed to comeback right after the first break and never looked back. The plot remained the same in the beginning of the second set. Slovakia led by three points at the first technical break, but couldn’t go much further as the powerful Serbians granted their opponents only five points more during the rest of the set (25-13). Serbia’s opposite Cikiriz led her team also in the third set, showing some impressive offensive combinations at the net. On the other side of the net, Slovakia didn’t find the energy and power to fight back. Serbia concluded the set 25-12 in their favor, hence booking their third consecutive win here in Ankara.

Slovakia head coach Eva Kosekova: “There was a big difference between the two teams and Serbia was a very strong team tonight. It was very difficult for us to score.”

Serbia head coach Ratko Pavlicevic: “All teams in our pool are strong and Slovakia is one of them. They played really well at the beginning of the first two sets. 3-0 is 3-0, so I am happy for that win.”

Serbia‘s Bianka Busa said: “This is our third win at this tournament. We are the only team that hasn’t lost a set. We are satisfied with the win, now we have to prepare for the match with Belgium.“

Nikolina Lukic added: “This win means a lot. In the first set we didn’t play as well we can, but it all was better in the second and the third.“

What Fivap does (and doesn’t do) for their coaches