Two sets down, the hosts made an impressive comeback versus Slovenia (3:2). 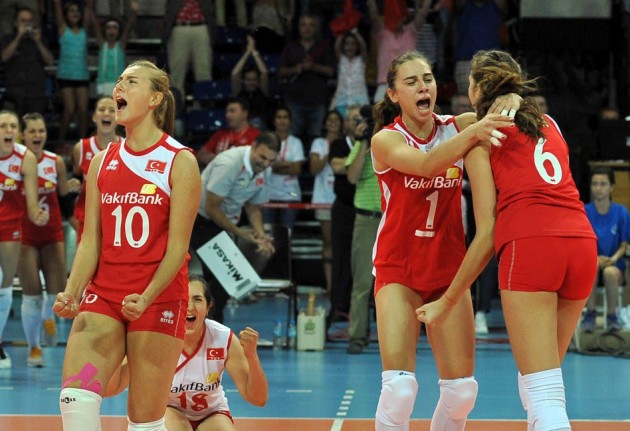 It was the match of the day at Baskent Hall in Ankara when host Turkey faced Slovenia in the eighth clash of Pool I. Two sets down, the Turks bounced back heroically to finally keep a clean sheet at 2012 CEV Junior Volleyball European Championship – Women. After 121 minutes of passionate play, Turkish middle-blocker Ceylan Arisan blocked Turkey in heaven (23-25, 17-25, 25-17, 25-12, 16-14). Slovenian Iza Mlakar topped the scorers with 18 points, two more than Turkish middle-blocker Asli Kalaç. The host booked eleven block kills, Slovenia only five. The young Slovenian talents served 18 aces, Turkey’s side 13.

After four intense sets (Slovenia booked the first two, Turkey No. 3 and 4), Turkish middle-blocker Arisan truly inspired her side with a faultless performance behind the service line to bring Turkey 8-1 in front at side switch in the deciding fifth set. Some rallies later, Turkey already led 12-6 and had six match balls at 14-6. However, the Slovenian squad never gave up, fighting back courageously, until the scoreboard showed 14-14 to discomfit the faithful Turkish supporters. The duel now balanced on a knife’s edge, before a successful Turkish offensive combination and a rock-hard Arisan block ended the astonishing roller-coaster match in extremis in Turkey’s favor.

Turkish captain Damla Cakiroglu: “I would like to congratulate Slovenia for their impressive game today. We showed how ambitious we were with our comeback. I am happy for the win.”

Turkish head coach Gökhan Edman: “We knew that being patient would be the key for a comeback. My team is under big pressure and expectations are really high after our triumphs last year. It was important to win.”

Slovenian captain Nika Blagne: “We proved today that we can play at the highest level. We were that close to a win and even that makes me happy.”

Slovenian head coach Bruno Najdic: “We prepared well for this match. We knew that good serves would be the key and as you can see we were really close to win the game.”