In front of 6’500 electrified spectators at Baskent Hall in Ankara, Turkey outclassed Serbia in straight sets (25-21, 25-22, 25-18) to win their third consecutive gold medal within two years in CEV and FIVB youth and junior competitions. 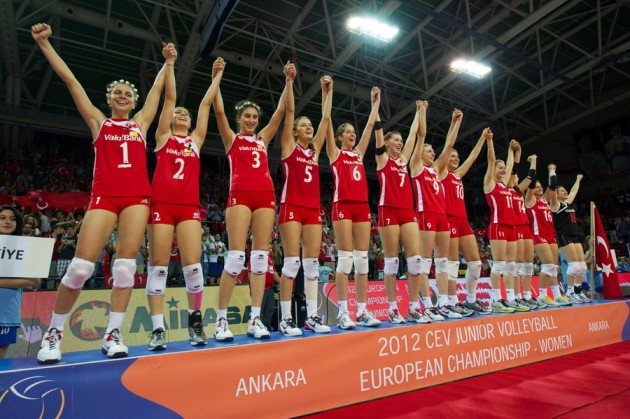 Only one year after their magical coups at 2011 CEV Youth Volleyball European Championship – Girls as well as at 2011 FIVB Volleyball Girls’ Youth World Championship, Turkish captain and Most Valuable Player Damla Cakiroglu led her team to an undisputed straight-set win versus 2010 runner-up Serbia (25-21, 25-22, 25-18) in today’s gold medal clash in Ankara. Best scorer of the match was Serbia’s captain Bianka Busa with 15 kills, whilst Kübra Akman scored twelve times for Turkey. The home squad booked ten aces, Serbia only four.
In front of their famous home crowd, the promising Turkish talents started confidently, taking a merited 8-5 lead at the first technical break. Both teams showed some fantastic combinations at the net and outstanding defense actions. The main difference between the two adversaries at the start of today’s gold medal match was their serve. Turkey put a lot of pressure on the Serbian passers, but couldn’t stop Serbia bouncing back at 12-12 with a blistering Natasa Cikiriz winner from back row. However, Turkey kept cool to regain momentum at the second technical time-out (16-13). Serbia’s head coach Ratko Pavlicevic asked for a break at 13-17 to reorganize their game plan. At 21-23, 2010 runner-up Serbia had reduced the gap to two points, but it was already too late. Ceylan Arisan brought up set point with a quick combination on the right side, before Turkish setter Cagla Akin blocked Nikolina Lukic to give the host a hard-earned 1:0 set lead. However, Serbia came back strongly. At the first technical time-out in set No. 2, the East Europeans already led 8-3. Captain Bianka Busa added some impressive winners to her scorers chart and the two Serbian middle-blockers Mina Popovic and Jelena Trnic were insurmountable at the net. At the second technical break, Serbia was still five points ahead. Turkey tried to take advantage of the imprecise passing of Serbian libero Nadica Dragutinovic, but her teammates helped her with some remarkable offensive actions. Nevertheless, Turkey came closer with six consecutive points to turn the tables at 19-17. It was the turning point of the second set. Turkey never looked back with Kübra Akman closing it out for the home squat at 25-22. The story of the game didn’t change in the third set. Turkey jumped out for an 8-5 lead at the first technical stop. Serbia still struggled with passing, forcing setter Sladjana Mirkovic to slow down her game. As a consequence, the Turkish defense players showed some brilliant back court play. At the second technical time-out, the scoreboard already displayed a seven-point gap in Turkey’s favor. The team of head coach Gökhan Edman continued their run. Cakiroglu smashed for 21-13, before some rallies later Akman blocked for a 23-16 Turkish lead. Aktas brought up match point with an impressive winner on the right, before a Serbian net touch bounced the Turkish ladies in heaven (25-18).

Turkish head coach Gökhan Edman: “My players made a fantastic job today. They followed our game plan from the start until the end. I would like to congratulate my staff members and the Turkish volleyball federation for the great efforts they made.”
Turkish captain Damla Cakiroglu: “We were ready for today’s game. We prepared very well. I guess, we played a great tournament and deserved the gold medal.”
Serbia head coach Ratko Pavlicevic: “Congratulations to the Turkish team; they were the better team today. Thank you for hosting us, it was an outstanding organization.”
Serbia captain Bianka Busa: “I don’t know what to say. Congratulations to Turkey, they played better than we did today.”