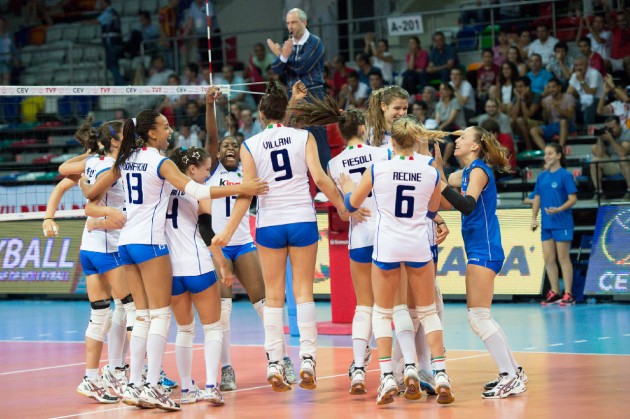 Best scorer of the match was Italy’s Miriam Sylla with 16 kills, including three block winners. Titleholders Italy jumped out for a convincing 4-1 lead in the beginning of the first set.
Powerhouse Russia needed some time to start engines, but fired back courageously at 6-8 to reduce the gap to two units. With three impressive block kills in a row, Russia leveled the score to 11-11 some rallies later. However, the Russian game was not regular enough to bother the well-prepared Italian team. At 13-18, Russia’s head coach Svetlana Safronova called her ladies off court to adapt some tactical ideas. It didn’t work as the defending champions kept the pace on an imposing level. Russia’s Olesya Nikolaeva sent her serve wide to offer Italy a merited first set win (25-20). It was not only a fight between the two teams, but also between the two power hitters on both sides. Russia’s Irina Voronkova had scored seven points in the first set, Miriam Sylla six for Italy. At the second technical break in period No. 2, things were still close with Russia leading 16-15. The East Europeans kept a small advantage at 22-21, but Italy stayed cool during “money time” to take a hard-earned 2:0 set lead (25-23). The plot of the match didn’t change in the third and last set. The Russian team seemed to be physically superior, but couldn’t take advantage of their skills. On the other side, the Italian team performed with an excellent fighting spirit, giving their opponents a hard time. Elena Perinelli smashed for a 22-19 Italian lead, before captain Cristina Chirichella ended the bronze medal duel in Italy’s favor (25-21) to offer the “squadra azzurra” its fifth consecutive medal since 2004.

Italy head coach Marco Mencarelli: “We are very happy with the bronze medal. Yesterday, we lost against a very strong Serbian team. Today, we managed to control the Russian team; we felt confident and positive.”

Italy captain Cristina Chirichella: “We wanted this medal so much; we put all our heart into this match. We played on a high level and made few mistakes.”

ITA W: What a surprise – Brakočević...