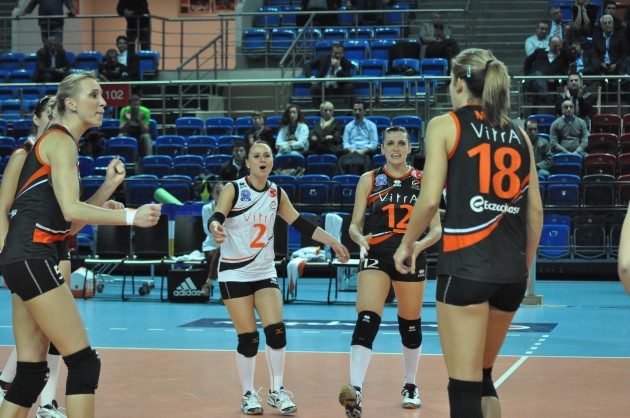 The first set was marked by continuous turnarounds, with Eczacibasi VitrA going up 8:6 at the first technical time-out, before a series of good serves contributed by Robin de Kruijf flipped the charts around (11:13). Neslihan Darnel got her side back on track (15:14) but the score remained very tight up to the end, with DRESDNER SC eventually going for the provisional 0:1 (23-25) helped by an outstanding performance of de Kruijf who scored 9 points all alone in this set.

As Eczacibasi was trailing down 3:6 early in set 2, starting setter Asuman Karakoyun was replaced by Özge Cemberci Kirdar. This change helped Eczacibasi fight back to 6 all and move ahead by the first technical time-out (8:6). Lioubov Shashkova was the one that anchored the home side (11:7) and with Neslihan Darnel as usually outstanding from the serving line, the local heroines got a margin of four by the second mandatory stop (16:12). Darnel shook the German defense once more (18:12) and this break paved the way for the provisional 1:1.

Eczacibasi caught an excellent start in set 3 (6:2, 8:3) anchored once more by Darnel and even a couple of time-outs asked by German head coach Alexander Waibl could not help DRESDNER SC fight their way back. This eventually happened in combination with the second technical time-out and similarly to what had occurred in the first set, DRESDNER SC was very solid down the final stretch (23-25) claiming the provisional 1:2.

Eczacibasi stormed out to a flying start in set 4 (8:3) and kept control of the operations (16:11) also later on; this time, even though they attempted it, DRESDNER SC could not compensate for that early break with Eczacibasi going up 22:16. Still DRESDNER SC reacted once more to make it to -1 (23:22) before two mistakes by the Germans helped Eczacibasi call for the tie-break (25-23).

TUR W: Lorenzo Micelli – “I am not satisfied with the way we played”