Katie Reeves and McKenna Thomas have plans in order to play another four years of volleyball side by side. Jessica Ibarra and Aleana Crow won’t be teammates anymore, but they could see one another on a few occasions over the next two years. 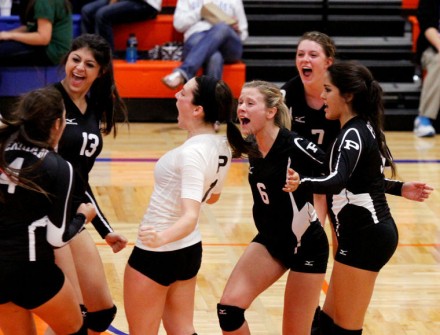 “It was a real experience. I never thought I’d be able to do that. I’m excited,” Ibarra said. Reeves and Thomas, co-captains during their senior season, are headed for Alpine and Sul Ross State University, a Division III program and member of the American Southwest Conference. Ibarra’s next stop is Ranger College, which belongs to the North Texas Junior college Athletic Conference. Crow decided on Midland College of the Western Junior College Athletic Conference. “Me and McKenna have always wanted to go together. We knew there was a chance it wouldn’t happen, but I’m glad it worked out,” Reeves said. “It’s something great for our program to show the other girls that it can take them to college and help them academically reach their goals as well,” Danley said.

Reeves, who recorded 1,024 assists, was named the District 2-5A Setter of the Year at the end of the 2013 year, which included a resurgence of the Permian outfit and ended one win shy of the postseason. Thomas, a defensive specialist, led the team with 710 digs and was a second-team all-district selection. Thomas and Reeves said there’s nothing quite like being part of a team chasing a common goal, and that aspect of the sport is something they are looking forward to experiencing at the next level. “It’s just so fun,” Thomas said. “It’s easier getting through school like that, I think.”

Ibarra, who had 86 kills and 43 blocks in her senior campaign, said Ranger offered the comforts of being away from home — far enough but still not too far — and then, obviously, the chance to play. Crow, said Midland College fit her requirements. Crow developed into a reliable point source for Danley and the Lady Panthers, landing 360 kills and had 464 digs from her outside hitter position en route to a first-team all-district honor. “I love the game and it’s what I wanted, to keep playing. I’m happy that I’ve got the opportunity,” Crow said.