Third-ranked BYU beat California Baptist in straight sets (25-20, 26-24, 25-22) on a historic night for Taylor Sander, who became the BYU career kills leader during the rally-scoring era. 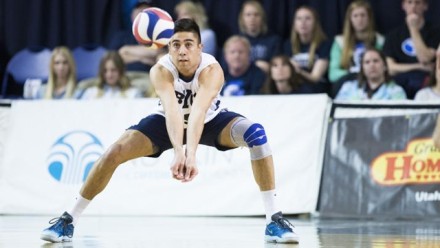 Sander surpassed Rob Stowell for the No. 1 spot in the rally-scoring era and No. 2 all-time at BYU and currently has 1,563 career kills. His 13 kills on the night led the Cougars, and he also contributed three blocks. Devin Young’s 10 kills were a season-high, and Michael Hatch had five blocks and seven kills, tying a career-high. Tyler Heap recorded 37 assists. With the sweep, the Cougars (16-4, 16-2 MPSF) have not dropped a set at home since January and have won 21 consecutive matches in the Fieldhouse. Cal Baptist (4-18, 2-16 MPSF) was led by Johannes Brink’s 18 kills.

“We were a little sluggish through some of those sets, but I like the way we battled back and regained some composure,” McGown said. “Our guys did a really nice job of settling down and playing the way we know how to play.”