There was only one way this Final Four was going to end - spectacular. Halkbank had prepared everything, their whole season was focused on winning the Champions League but there was too much of quality and experience on Belogorie's side. 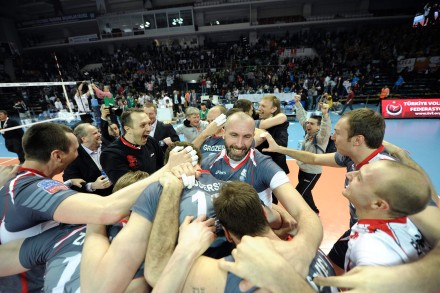 Russians started strong, serving with power, defending with insane will and got rewarded with an early lead and then Mitar Đurić started playing out of his mind. His spikes were just too strong, too fast and too unpredictable for Belogorie to deal with and Halkbank managed to even things up at 1-1.

Then the great great Sergey Tetyukhin showed up. “Only” 38-years of age, Russian Olympic champion basicaly said, “give me the ball and get out of my way”, and boy did he delivered? Spike after spike, dig after dig, he was just masterful, just on another level. On a level that couldn’t be matched by anyone.

So Belogorie easily got third set and claimed that crucial lead but still Turkish squad on the wings of Kaziyski and Mauricio slowly clawed their way back into game. Suddenly there was 22-18 score in favour of Halkbank and we were heading to tie-break when (surprise, surprise) Tetyukhin went on and served a 22-23 comeback by Belogorie! For that point on, Halkbank was devastated and it was point of no return. Muserskiy’s block decided the game and brought that trophy which Belogorie chased for 10 years now.