The top four seeds in the NCAA Division 1 Women’s Volleyball Championship advanced through the First and Second Round and will host “Sweet 16” - Regional semifinal and final - on December 9 and 10 on their campus sites. 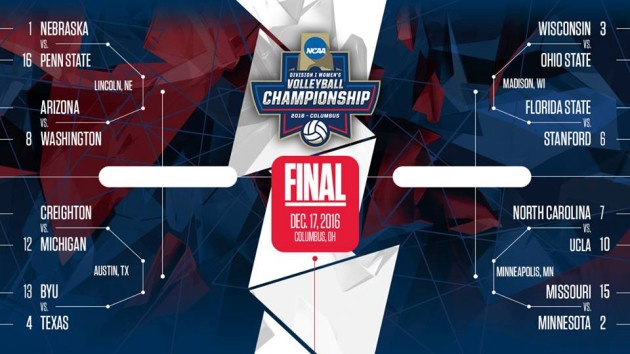 Top seeded and also reigning NCAA champions Nebraska swept New Hampshire (25-9, 25-23, 25-18) and Texas Christian University (25-22, 25-12, 25-16) to reach regionals. In front of 8,204 fans inside the “Bob Devaney Sports Center” against TCU, Huskers got eighth straight post-season victory and marked the 100th NCAA Tournament win in program history. Nebraska became just the second program in NCAA history to reach the 100-win milestone and advance to an NCAA Regional for the 32nd time, the most in NCAA history. Nebraska also improved to 29-2 on the season. Thus, Huskers scheduled 16th-seeded Penn State next Friday. Senior Kadie Rolfzen paced the Huskers against TCU with a match-high 14 kills on only 30 swings. She also added seven blocks, four digs and two assists.

Second-seeded Minnesota followed Nebraska’s footsteps to achieve two straight-set wins over North Dakota and Hawaii, respectively. The Gophers improved to 27-4 on the season, and remain undefeated at home. Sarah Wilhite accomplished a double-double with 13 kills and 11 digs in Second Round versus Hawaii.

Texas destroyed University of Texas Rio Grande Valley and Southern Methodist University, in this order, to reach 11th-straight Sweet 16, 29th overall in program history. At “Gregory Gym” in Austin, junior outside hitter Ebony Nwanebu led the hosts Longhorns in kills for the ninth time on the season with 15.

Creighton made the biggest upset in Second Round by eliminating fifth-seeded Kansas 3-2 (21-25, 25-20, 25-17, 16-25, 20-18) on road at “Horejsi Family Athletics Center” in Lawrence, Kansas! This was the first home loss of the season for Kansas while the Bluejays advanced to Sweet 16 for the second consecutive season thanks to 23 kills from Jaali Winters.

See all results and bracket!

These are four regional sites, with teams’ records:

At each site, teams will compete in single-elimination regional semifinal competition on December 9. Regional final matches are set for following day. Regional winners will advance to the national semifinals and championship final co-hosted by The Ohio State University and the Greater Columbus Sports Commission at “Nationwide Arena” in Columbus, Ohio, on December 15 and 17.

RUS M: Check this out – Pankov made 9 aces in a single game!

USA and Cuba to meet each other...